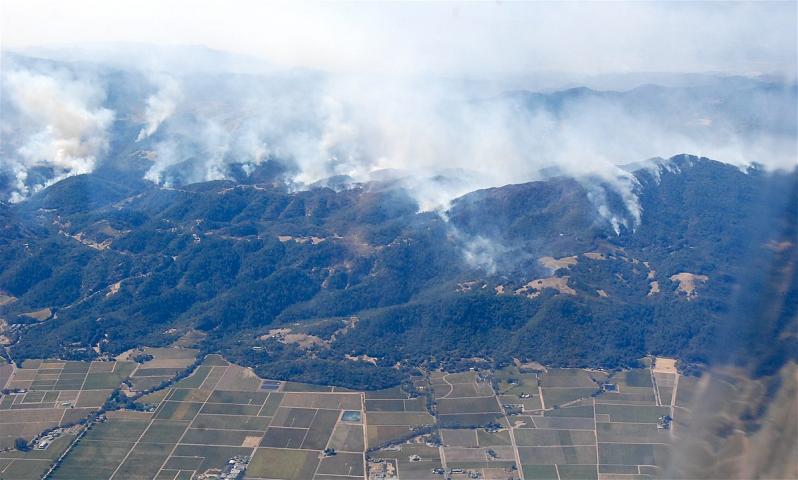 photo credit: Courtesy of the California National Guard
This is the third and final story in a series from KRCB in collaboration with the USC Annenberg Center for Health Journalism California Fellowship, looking at the detrimental health effects of wildfire smoke and the dangers Sonoma County's agricultural workers face.
Living and working in the midst of wildfires and the smoke they produce is becoming a more prevalent part of late summer life in Northern California. The consequences of breathing wildfire smoke without proper protection can last well after the smoke has cleared. For Sonoma County's agricultural workers, those dangers can be acute, but progress has been made.
"We've been fighting for this cause for a long time," Sandra de Leon said. "And now that we're finally seeing something being done about it, I can't help [but] feel happy."
In August, after months of contentious government meetings, and organizing by both workers and employers, new protections for agricultural workers entered into law through the Sonoma County’s Ag Pass program, in part due to accounts from workers detailing wrongs.
Some, like de Leon, are taking the time to celebrate what they see as a hard-fought victory. Others still feel there’s a ways to go.
One worker, who asked to remain anonymous to avoid any potential for retaliation or being passed over for work, shared his thoughts via a translator.
"Just treating us more like people because we are; we're often treated more as things rather than actual people and I want more equality within the workers," said the ag worker.
The call for greater official agricultural worker protections in Sonoma County got louder after 2020’s Wallbridge-LNU complex fire. County supervisor Lynda Hopkins represents the district where much of that fire burned.
"We achieved some substantial acknowledgement of human dignity and rights for farm workers." Hopkins said.
As noted by Sonoma County officials, there is still potential for abuse within the regulatory framework.
Ag worker Anabel Garcia, who has pushed for greater protections within mandatory evacuation zones, described her experiences during previous fires.
"I have had to work and not only have workers had to put their health at risk, but their families as well, because they have to leave them behind and we were not provided any masks and pretty much had to make do with what we had." Garcia said.
Again, Sandra de Leon.
"One of the first times I worked after the 2017 fires, I had to work directly in the smoke," de Leon said. "It almost felt like the ash was part of the grape while we were picking, and it worries me."
Since 2017 in Sonoma County there have been ten inspections opened by CalOSHA, into farm labor contractors, crew leaders, and management service companies. Seven of those inspections have resulted in fines.
Hopkins said the Ag Pass program is meant to increase oversight and reporting.
"And then we also directed staff to come back with enforcement, you know, and ensuring that there is some kind of a complaint hotline that farm workers could access." Hopkins said. "If someone is violating the terms of the Ag Access Pass. I think one of the really critical things is ensuring that farm workers feel safe to be able to question whether the program is being followed."
But when it comes to protections against wildfire smoke, the new Ag Pass protections defer to CalOSHA regulations.
"CalOSHA has a very minimal presence in Sonoma County," County Supervisor Chris Coursey said.
His concerns about wildfire smoke protections stem not only from CalOSHA’s minimal enforcement presence, but from ambiguous language within the regulations.
"We've got language in this that says when the particulate level gets to a certain number, they have to provide N95 masks, but we don't actually require anybody to have N95 masks available," Coursey said. "I think a requirement to have a stock of masks on hand at all times when you're in an evacuation zone is not an unreasonable request, but that's not included."
As it stands now, If an employer measures an air quality index reading below 151 at a job site they do not have to provide protective respiratory masks. Even at an AQI reading above 151, an employer is not required to provide respiratory protection if work will occur for less than one hour. For reference, anything measured above 100 on the air quality index is considered unhealthy.
Despite the lax thresholds of the new regulations, at least they are something, say workers like Garcia.
"I'm very proud and happy of all the work we've done and the battle we've been having is not in vain." Garcia relayed.
And de Leon.
"During the first set of fires, we never were provided any sort of masks and if we wanted any, we had to buy them ourselves" de Leon said. "Or we had to use, bandanas, which really didn't help. Now that they have to provide them, I'm feeling very happy that they have to consider the fact that we help contribute to their profits. So to be finally be treated with any sort of respect is very good."
The slate of new laws, statewide and locally acknowledges the reality of the consequences climate-related issues have on our health. Time will tell how well these efforts to safeguard the people who care for and grow what we eat and drink will work.
Reporting for this series was done in collaboration between KRCB and the USC Annenberg Center for Health Journalism 2022 California Fellowship, with translation from Peter Morales Garcia.