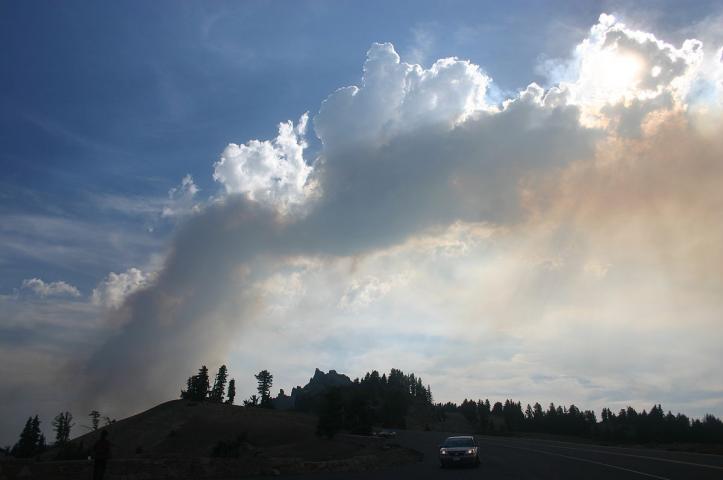 photo credit: Courtesy of Wing-Chi Poon/Wikimedia
This is part two in series from KRCB in collaboration with the USC Annenberg Center for Health Journalism 2022 California Fellowship looking into the danger wildfire smoke poses to Sonoma County's agricultural workers.
Wildfire smoke can leave wounds that last long after the fire has been put out. In October of 2017, the Tubbs Fire burned for nearly the entire month, turning over 5600 homes and businesses into cinder and ashes..and making the North Bay air noxious with smoke for days on end.
Coinciding with harvest time, it renewed questions over health and safety of agricultural workers, compelled to work in unhealthy conditions.
Over the past five years, a focus has been on access to and work within mandatory evacuation zones. Sonoma County’s recently-approved Ag Pass program has provisions geared towards protecting workers from wildfire smoke exposure.
According to data from the Bay Area Air Quality Management District, since the Tubbs Fire, parts of Sonoma County have experienced at least 24 days of air quality considered unhealthy for some, ten of those unhealthy for everyone. That’s when the small particulate matter produced by wildfire smoke and other pollutants causes adverse health effects.
Doctor Jenny Fish is a local physician who counts many low income individuals, farm workers, and immigrants to Sonoma County among her patients. She said air quality above 100 on what’s called the Air Quality Index, or AQI, needs to be taken seriously.
"As a physician, I understand the both short and the long term health consequences of having extended exposure to AQI’s over 150." Fish said. "If there's a wildfire and the AQI, for example, is over a hundred, I'm not going outside or spending any amount of time outside without like an N95 mask."
In Sonoma County, harvest season coincides with the period of greatest wildfire risk - September, October, and November.
"The reality is that farm workers, even if there isn't an evacuation zone, farm workers are working in that, hours and hours and hours on a day without appropriate PPE, without necessarily safety training." Fish said.
She said she has seen these health impacts firsthand.
"What I see in my office, for example, we see increased asthma." Fish said. "There's well documented scientific evidence for increased, both pulmonary and cardiac, so both heart and lung consequences. So there's the short term, and then there's the long term exposure. And that's where you're really getting the heart problem, lung problems, chronic problems, asthma, COPD."
Research has shown wildfire smoke can be as much as ten times more harmful than similarly-sized air pollution from different sources. Doctor Fish said the ailments are not only physical.
"The other piece of what I'm seeing is the psychological impacts of being a community that is not protected and is disregarded." Fish said. "That includes increased anxiety, PTSD. I have patients that lost their homes in fires while they were out working, picking grapes. And so the mental health toll is also incredibly profound."
There’s been an acknowledgement of wildfire smoke dangers at the state level - where much of the regulatory power lies. 2021’s Assembly Bill 73 added wildfire smoke events as health emergencies and designated agricultural workers as ‘essential workers.’ That makes them eligible to receive protective equipment from a state PPE stockpile. And this year’s Assembly Bill 2243 could lower the threshold at which respirators must be provided to workers, from 500 on the air quality index to 301, if not lower.
On the local level, the recent approval of Sonoma County’s Ag Pass program could make an impact.
"We're in a better place today than we were two or three years ago." Sonoma County 3rd District Supervisor Chris Coursey said. "You know, I think that the decision we made makes an improvement on the situation."

According to the rules laid out under the Ag Pass system, approved on August 30th, employers are now required to take a more active part in protecting workers. For one, they must provide adequate education and information on wildfire smoke. In addition they must reduce exposure or provide sufficient protective respiratory equipment if exposure cannot be limited, and encourage voluntary use of that protective equipment.
Coursey said he remains concerned about whether the precautions - both state and local - will truly be carried out.
"I think that we can do better and, and we should do better." Coursey said. "This is basically a situation of trusting people to do what we say are the things that they have to do. Unfortunately we've heard over and over again that even though all of the rules are already on the books, we hear that those, those are violated and they aren't enforced by us at the county. They are California rules, and they're enforced supposedly by OSHA, Cal OSHA."
Workers share Coursey’s skepticism about follow-through. Among day laborers we spoke to in Santa Rosa - who asked to remain anonymous - vulnerability is widely felt. Their knowledge of worker protections and Sonoma County’s Ag Pass program is summarized with the help of local translator Peter Morales Garcia.
"They stated that they had no knowledge of these protections nor about the program." Morales Garcia relayed. "And one group did say that while they were aware of it, their bosses or the people they were working under did not necessarily enforce or enact upon those protections."
We also asked if they had previously worked during wildfires and/or smoke events.
"A few said that they did, but they had to provide their own mask." Morales Garcia said. "The people they were working under did not provide any sort of equipment for them to deal with the smoke."
With the new additional precautions under Sonoma County’s Ag Pass program - and the increased scrutiny it has brought to health, safety, and labor concerns within Sonoma County’s agricultural sector, workers on the farms and in the fields of Sonoma County have more protections than ever - on paper.
"Most people are gonna follow the rules." Supervisor Coursey said. "But the reason that we have rules is because always somebody won't follow the rules."
How well those written protections translate into practice remains to be seen in the wildfire-prone months and years to come.
Reporting for this story was done in collaboration with the USC Annenberg Center for Health Journalism California Fellowship and KRCB with translation assistance from Peter Morales Garcia.