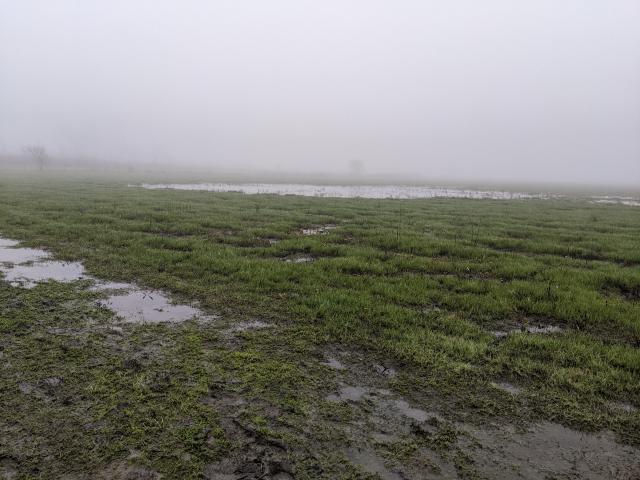 An unlikely sight: September rain
photo credit: Marc Albert/KRCB
The risk of major wildfire across Sonoma County and the north coast is just about nil for the next week or so. That's according to a federal inter-agency weather and fire forecasting agency. Recent early season rains drenched some areas, and quenched others. But, fire season isn't quite over.
Brent Wachter is a Fire Meteorologist with Predictive Services, a federal inter-agency group that tracks plant and soil moisture, along with weather, providing intelligence to CalFire, US Forest Service and Bureau of Land Management, among others. He said the dynamics have a lot to do with timing.
"All that recent moisture certainly has an impact, especially in the short term. We had some pretty highly flammable fuels, especially those dead fuels that are on the ground...coming out of that heatwave event not that long ago, so those are going to be a lot less flammable, even in areas that picked up a quarter of an inch or a half an inch. The other long term impact is that areas that received a little over an inch of rain over a four or five day period, you usually get some sort of germination and a flush of green up."
Green up means grass. And lots of it.
"The key part is how deep that green grass will be. You kind of think of it as a lake of water because that green grass is going to hold some sort of amount of moisture, and that will rob any kind of ignitions we do get. Once it starts to dry out again, which is expected over the next few weeks, that will kind of rob some of that fire's energy."
Nevertheless, risk remains. Typically, hot, drying winds push into California in the fall, the wake of storms moving across the Pacific Northwest. The dreaded off-shore winds that have made October, and recently early November, exceedingly dangerous.
"The probability is certainly less than what we would have a week or two ago, but I wouldn't rule it out, we could still see a pretty significant fire," he said.