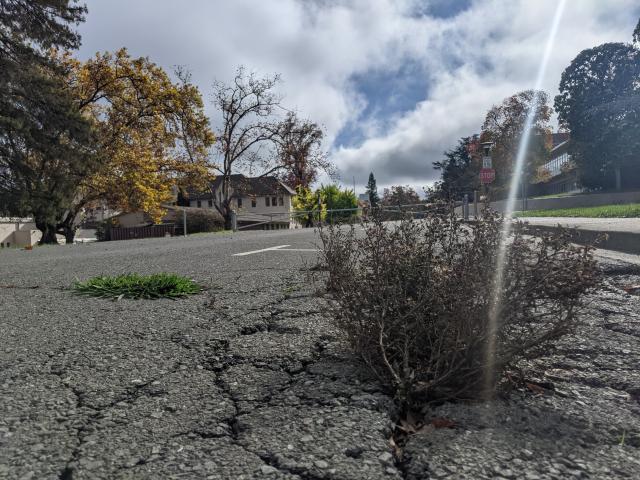 The SDC campus needs $100 million in infrastructure upgrades.
photo credit: Marc Albert/KRCB
After the recent release of proposals related to re-using the Sonoma Developmental Center, the public had it's first opportunity Thursday to sound off on plans for a thousand homes, nearly as many jobs and a road connecting Arnold Drive with State Route  12. Sound off they did.
Officials tried framing the proposal as optimal, considering the requirements, limitations and financial considerations. Brian Oh is with Permit Sonoma
"Everything about this project is a balance. It's a balance of old, it's a balance of new. It's a balance of a number of objectives, from affordable housing to preservation of open space and recognizing that affordable housing is the top priority, how are we bringing and proposing a reasonable number of units within the developed campus that directly addresses and meets the community vision and guiding principles this project has set out to do," he said.
But critics found fault with the process and results. Local resident, John Stalcup.
"There's a fire report that says everything is fine, essentially, and everything isn't fine. There's no analysis and there isn't any analysis on most of the critical significant impacts of this plan, which, you know I've been here for a couple of decades and I've seen a lot of things go through. I've never seen such a paucity of analyses, as this," Stalcup said.
Arthur Dawson, who chairs the local Municipal Advisory Council or MAC, called for sharply scaling plans back.
"The DEIR itself states that the historic preservation alternative is environmentally superior. That alternative calls for a cap of 450 housing units, the same number that has been endorsed by the MAC. Scale is the most obvious mitigation for this project. A smaller project means a smaller impact."
Officials maintain that the scale, and additional elements are necessary to help pay for infrastructure improvements.
Glen Ellen resident Sharon Church disagrees, saying officials have lost focus.
"We don't need hotels, conference centers, expensive homes. Let's get real here. The community has participated, we really want to feel like we're being heard and we'd like to partner in this but so far it doesn't feel like that's what's been happening."