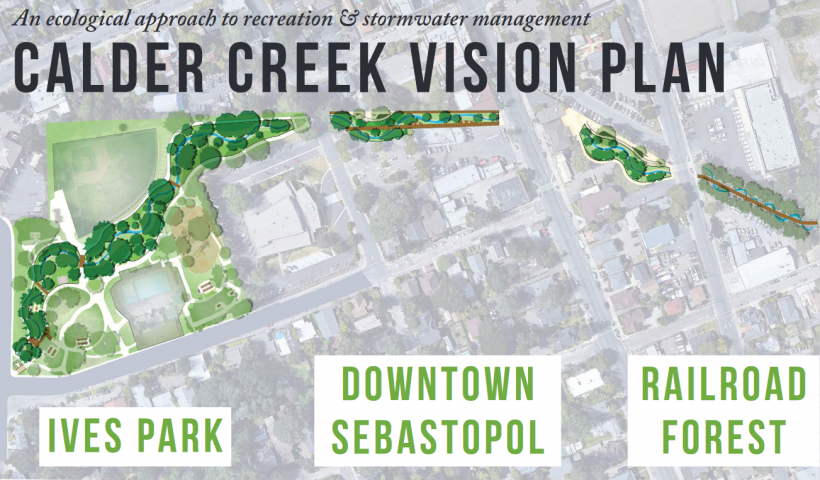 photo credit: Courtesy the City of Sebastopol
Covered up and reworked throughout much of the last hundred plus years - urban creeks are getting a second look from local governments for their vital role in local ecosystems.
Hidden under paved parking lots or fenced away below steep walls, Sebastopol’s Calder Creek is often inaccessible and out of sight - at least for now.
"The ecological benefits, the potential for fisheries, the storm water and groundwater recharge benefits, atmospheric cooling." Jessica Hall said. "There's a lot of reasons that under-gird, why we are doing this."
Hall, is a Switzer Foundation Fellow who’s helped develop a restoration plan for Calder Creek.
The Sebastopol city council has approved the early stages of the restoration plan, which focuses on the section of creek running through Ives Park.
Hall said the plan aims to balance preservation of communal spaces with re-wilding of the creek.
"We have a number of pedestrian crossings as well as a vehicular crossings to maintain access to the baseball field and its concession areas in order to protect the redwoods, which was really important to all of us." Hall said. "We directed the stream alignment away from the redwood trees. And we also put in a boardwalk that protects the tree roots."
Ann Riley, co-director of California Urban Stream Preservation, said the current configuration of Calder Creek within Ives Park is less safe than a restored creek.
"The kind of concrete channel and the fence that's existing is really a safety hazard." Riley said. "What cities are doing is naturalizing the creeks so that the water goes at lower velocities spreads out at a flood plane."
Officials are looking at potential future concepts for restoration of three sections of the creek which currently run through underground culverts.
The sections between Ives Park and Main Street, and between the West County Museum and Petaluma Avenue could be restored with pedestrian access points and promenades above the natural banks. That's while a third section along the Joe Rodota Trail at Petaluma Avenue could be replaced by a raised boardwalk - helping mitigate chronic flooding on Petaluma Avenue.