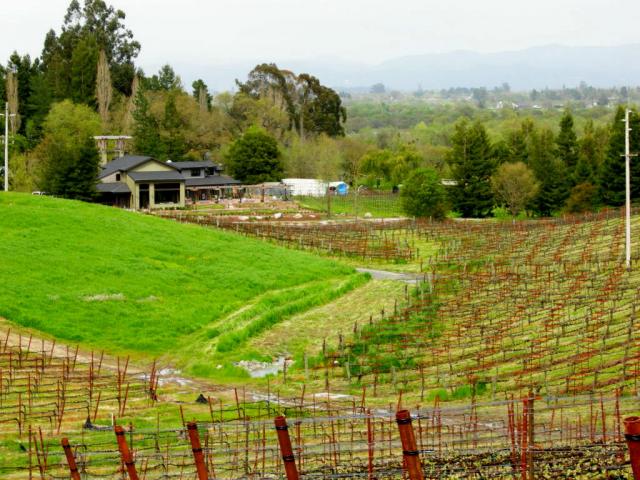 photo credit: Courtesy of Al_HikesAZ/flickr
A key vote took place in late August in a five-year-plus-long controversy over agricultural work in evacuation zones in Sonoma County.
After months of official and staff deliberation, repeated worker demonstrations, and organized pushback from vineyard owners, the Sonoma County board of supervisors voted unanimously to approve a county-wide "Ag Pass" program.
During an emergency, it allows agricultural producers and a limited number of employees to access commercial operations like farms, vineyards and livestock facilities within mandatory evacuation zones.
That's if they have to do critical jobs like watering crops, caring for livestock or maintaining generators.
Supervisor James Gore summed up how he saw the divide in opinion over the program’s shape.
"One of the things that we've dealt with, with this item is a dueling world." Gore said. "One, which is a straight linear look at safety, evacuation zones, public safety, how we manage things. And on the other side, we have a view which comes into account of labor, labor issues, communication training, and all things, not just safety, but well being."
Despite Gore’s efforts, one activity that did not make it into the program: wine grape harvesting.
"I feel that the core of the program is to allow machine and or harvesting from local full-time employees." Gore contended. "And it explicitly says no harvesting. So that's really how this program began. That's one of the biggest values of the whole program. I don't understand why we wouldn't allow at minimum a, a machine crew to go in, which is specialized and very small, if we're going to allow dairy harvesting."
Sonoma County Agriculture Commissioner Andrew Smith said the exclusion of harvesting activities from the program is a matter of safety.
"Harvest also utilizes the work of farm labor contractors that may or may not be resident farm labor contractors within the county of Sonoma, meaning that the workers in those situations do not know the lay of the land, the topography, the in and out routes." Smith said. "And that's why we've wanted to secure it to full time employees of these operations so that there are people identified by the employer that have a working knowledge of the properties."
Margarita Garcia, an indigenous “campesina” or field worker, described her past experience working during major fires to the board, through the use of an interpreter.
"I am sharing my personal experience not so that you have pity for me, but rather so that you can understand everything that's happened to our fellow field workers." Garcia said. "In 2017, my house was completely burned down. I was working at night. So for that reason, I lost my job. I lost all of my work equipment. And in 2019, we were also working in an evacuation zone."
Another major concern dividing opinion on the program: the role of the sheriff’s office role in administering and operating the Ag Pass. Sonoma County Farm Bureau executive director Dayna Ghiradelli staked out the Bureau’s position.
"The Sonoma County Farm Bureau supports the agriculture access verification card program." Ghiradelli said. "As written. We believe the sheriff's department is best suited to serve as the delegating authority and their collaborations with the county Ag Commissioner and cooperative extension offers safety and security for business owners, workers, and our community."
Renee Saucedo, director of ALMAS, a women’s worker organizing group at the Graton Day Labor Center, said many field workers feel differently.
"The immigrant communities lacks trust in the sheriff's office, especially after the tragic death of Mr. Pelaez; and because we have no non-collaboration policy or sanctuary ordinance currently in place." Saucedo said. "If the Board of Supervisors does not create any oversight mechanism of the sheriff's office, they are leaving workers and the community, no choice, but to enforce these improvements ourselves."
Supervisor Chris Coursey echoed the concerns of workers and advocates. He took particular issue with a confusing clause in the resolution delegating authority to the sheriff to amend the program.
"The board of supervisors makes policy." Coursey said. "The sheriff takes care of safety. This is policy that we're talking about. We need to have control over how this is changed, when it's changed."
Per Coursey’s insistence, the clause was removed, and the board’s ultimate oversight of the Ag Pass program confirmed.
One idea that gained support for further consideration, but was not included in the approved program, was a farm worker resources center - akin to the program established by Ventura County.
The director of Sonoma County's Office of Equity, Alegria De la Cruz, said such a resource center is better suited to meet the needs of workers. As opposed to having the sheriff’s office be the point of connection between workers and government.
"Given the realities of that population's relationship and the consequences for coming into contact with the criminal justice system." De la Cruz said. "I think it really does speak to the importance of having something like a farm worker resource center that is a health and human and Ag Commissioner with state partners. Also playing a role. There is lots of funding at the state level at this point, both for the infrastructure, as well as the staffing for some of these multi departmental approaches."
Concern with oversight of the required safety training necessary to obtain an Ag Pass was addressed by the director of county emergency management, Chris Godley.
"There have been reports that people received certificates of completion of the training without having actually attended the training course." Godley said. "So in the program, we are requiring that there'd be sufficient proof of actually having attended the course."
The approved "Ag Pass" program is now in effect, with officials estimating an online registration portal to open in mid-October.