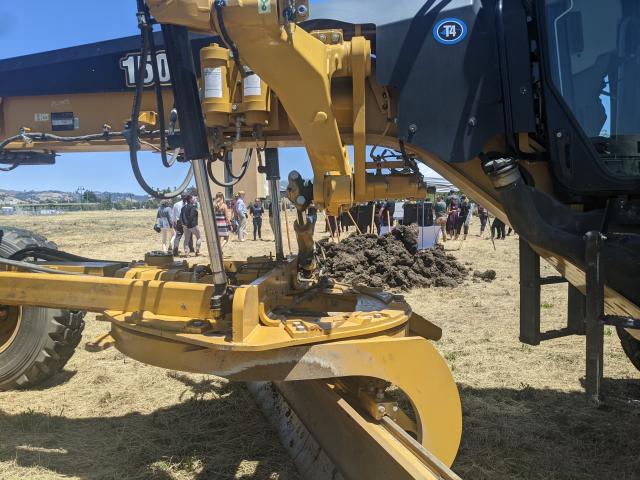 File photo of recent groundbreaking for Labath Landing
photo credit: Marc Albert/KRCB
With little debate and no amendments, Rohnert Park's city council Tuesday approved barring people from sleeping in wide swaths of the city.
The measure was approved 3-0 with both Vice Mayor Samantha Rodriguez and councilwoman Pam Stafford absent. It bans, among other things, camping within fifteen hundred feet of any school, daycare or library, prohibits cooking gas from being left unattended and wastewater from being dumped.
The council has long heard demands for action. Several business owners in proximity to the Roberts Lake Park and Ride, now a large tent city, cited random vandalism and encounters leaving employees feeling threatened.
Owner of a nearby Mary's pizza shack location, Cully Williamson says he's been patient and compassionate, but has reached the end of the line.
"I, I'm beyond upset. You guys need to come up with a plan to get rid of that site. Move it to Sonoma Village! Move it to State Farm! You own that property on State Farm, right across from the police station. It's a much better area than where we are now."
The city's Director of Development Services, Mary Grace Pawson, said the new rules are designed to restore order and give the council flexibility to easily modify it with new rules, or strike provisions ruled unconstitutional.
"We want to ensure camping takes place in appropriate locations and doesn't negatively impact the city's creek corridor resources, schools or learning centers and we want to provide the city with additional tools to accomplish these objectives."
Mayor Jackie Elward says the new rules, along with Labath Landing--a 60 unit tiny house village--should start alleviating issues.
"To our residents that are out there, the businesses, hang in there with us. We are helping together. I wish I could say, let's fix it right now, this minute, but it doesn't work that way. We have to follow certain rules that we can't control."
That's because about half of the city's homeless population could be accommodated at Labath Landing. Once the city has shelter capacity for every homeless person, it can ban camping entirely without violating the Ninth Circuit Court of Appeals Martin V Boise decision.
The ordinance is expected to be adopted in two weeks and take effect October 27th.