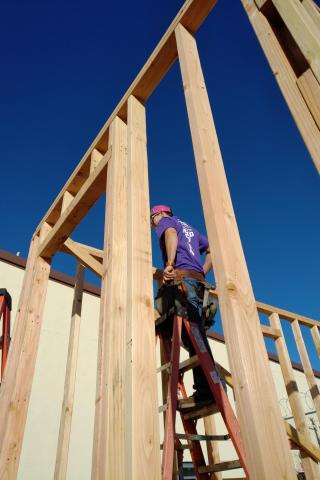 photo credit: Marc Albert/KRCB
Adding a deck in Santa Rosa? A permit and inspection will set you back $199.93 before the first board or nail. A retaining wall? $185. Are those fees exorbitant and hampering the city's progress? Santa Rosa is considering revamping how and how much it charges for development fees, permits and inspections.
The effort won't touch one of the major bugaboos of the real estate industry: impact fees. But officials are reaching out to builders and the general public on how to streamline a cumbersome process, and perhaps subsidize certain efforts.
Claire Hartman is director of Santa Rosa's Planning and Economic Development Department
"The services are still going to be provided, you're still going to have access to transit, you're still going to have access to sidewalks and streetlights and what not. So, how do you afford that? and that is again, another part of the challenge---its not just the interest to incentivize one type of use but how are you going to mitigate that program. And so where does that additional resource come from?"
The answer---from the city's general fund. That's because voter approved legislation requires a direct link between permit fees and what they cost to deliver. That, Hartman acknowledges would mean less money available for other city functions.
Hartman says officials hope to balance competing needs.
"For a resident homeowner, (who) has all the time in the world to do it, so they want the cost down, so that's something we can work with in the fee schedule about. In other cases, like a major developer that regularly does business with us, might want to express, 'we'll pay more if it can be kept on time or even done faster, we'll pay more."
An online survey is available on the city's website until Tuesday. Official hope to formulate, debate and adopt a new fee system a year from now.