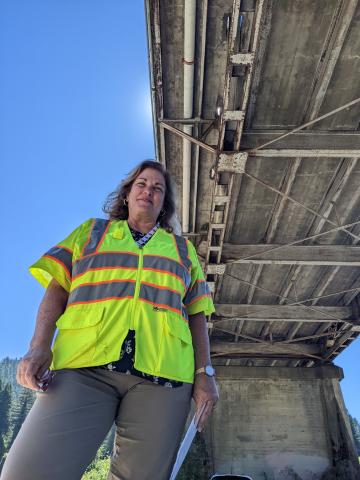 Though rated fair, the 88-year-old Bohemian Hwy bridge could fail in an earthquake
photo credit: Marc Albert/KRCB
Well-loved and long-travelled, the nearly ninety-year-old Pratt Pony truss bridge spanning the Russian River at Monte Rio is nearing a date with oblivion.
More of an utilitarian work horse from the 1930's Works Progress Administration-era than a marvel of engineering sporting soaring elements, the bridge, despite a landmark designation, has reached the end of the line.
Janice Thompson is deputy director of engineering and maintenance with Sonoma County Transportation and Public Works.
"She was built in 1934 and she has served us well"
Time however, marches on. While it lacks modern features such as wider lanes for bigger vehicles or a breakdown lane, findings ruling it seismically deficient---and too expensive to retrofit, means replacement.
Environmental reports were recently approved by the county board of supervisors, capping an eight-year process deemed fast-tracked.
"The new design is called a steel-tied arch. First of all, it's wider. There'll be twelve foot travel lanes, eight foot shoulders, a barrier between that and a six foot sidewalk on both sides. It's going to be a very nice-looking bridge," Thompson said.
There will even be mid-span areas to enjoy the view.
The design and route---the new bridge will be just downstream from the existing one---were selected in a series of community meetings, which proceeded with little opposition, Thompson said.
It will be 54-feet wide, practically double what it will replace. Despite federal and state funding, the county is at the helm.
"It's one of our largest construction projects that we've ever taken on."
The county is now negotiating with about a half dozen property owners to purchase the right of way. It won't go up overnight though.
"We have work windows for environmental reasons," Thompson said.
Those reasons being migrating salmon and steelhead. In-stream work can only occur between May and October.
"When you schedule it out, it's a three year project."
The current bridge, unlike it's upstream cousin in Guerneville, will be demolished.