Advocates warn reproductive rights remain under threat, even in California 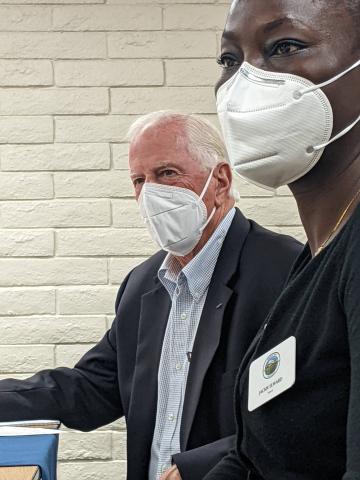 Rep. Mike Thompson (D-Napa) and Rohnert Park Mayor Jackie Elward
photo credit: Marc Albert/KRCB
With some states adding restrictions or prohibiting abortion, California is moving in a different direction. Nevertheless, local medical experts say they remain concerned about access, misconceptions and the future, even in solid blue California.
A statewide constitutional amendment guaranteeing a right to abortion and contraception is set to go before voters in November.
But at a roundtable meeting convened on a recent Friday by North Bay congressman Mike Thompson Friday, it was obvious concerns remain.
Cheryl Johnson, executive director of the Sonoma Valley Community Health Center, says patients seeking care are whipsawed by sudden shifts.
"This toppling of Roe V Wade is just a real cornerstone for other rights to be taken away. And, so what we are seeing right now is people who are coming in are anxious because of the fact that they don't know what is the next right that is going to be toppled."
Johnson was joined by officials from clinics in Santa Rosa and Petaluma. They say prohibitions will mean fewer medical students being trained, causing a long term brain drain that will stymie access.
Johnson said a class divide is developing.
"People who have money, who have means they will find a way to get their contraception, their abortions, but people who do not have those opportunities will be the ones who have to take advantage of social programs, of other types of governmental support."
And such programs are seemingly on the perpetual chopping block. Others told Thompson the 'public charge rule' results in many who qualify, avoiding medical help, concerned that receiving taxpayer help will upset their immigration status.
Nevertheless, attendees, including Margaret Martinez Franks, feel there is strong support here.
"Thankfully, the governor has been incredible in allowing a huge amount of state funds to go toward abortion care and reproductive health care. That money is going to go a long way to assuring that not only Californians, but those coming in from out of state are able to get the health care that they need and that they deserve.