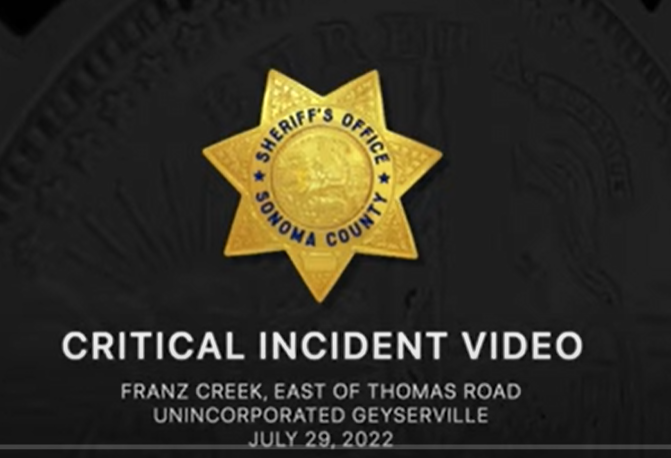 The attorney representing the family of a man killed by a Sonoma County sheriff's deputy in July says that the officer who shot him did not follow proper protocol and does not have the proper temperament to be in law enforcement.

Izaak Schwaiger, who has represented many parties in suits against law enforcement, is launching a federal wrongful death lawsuit against both the county and the deputy for the death of David Pelaez Chavez, 36, of Lower Lake.

Pelaez Chavez was shot by Deputy Michael Dietrick on July 29 in rough, hilly terrain near Geyserville after officers said they repeatedly asked him to drop a hammer and a tiller he held in one hand and a rock in the other.

Pelaez Chavez does not speak English and the deputies used rudimentary Spanish to communicate with him, using words like "alta" (stop), "no mas, no mas" (no more) and "amigo" (friend). They never asked him to drop his items in Spanish, according to footage released by the Sheriff's Office.

An investigation into the shooting has been undertaken using the Sonoma County Critical Incident Protocol and the Sonoma County District Attorney's Office is also leading an independent investigation. Schwaiger questions whether the shooting may also fall under Assembly Bill 1506, passed in 2020, which dictates that any law enforcement officer-involved shootings against a suspect who is not wielding an object that is a "deadly weapon" will be investigated by the state attorney general.

"Deadly weapons" in the law are outlined as "any loaded weapon from which a shot, readily capable of producing death or other serious physical injury, may be discharged, or a switchblade knife, pilum ballistic knife, metal knuckle knife, dagger, billy, blackjack, plastic knuckles, or metal knuckles," though are not limited to only those things.

Sheriff's Sgt. Juan Valencia said the Sheriff's Office can't comment on the shooting since it is under independent investigation, but that Bonta's office said that a rock is indeed a deadly weapon.

A spokesperson for Bonta's office said that they are aware of the Pelaez Chavez case, but that their office is "currently not involved" in the case. They also further defined what constitutes a deadly weapon:

"Objects that have a legitimate non-weapon purposes are considered deadly weapons only when, based on all the circumstances, they are actually being used in a manner likely to produce death or great bodily injury. The following are examples of objects that have been considered a deadly weapon when used in that manner: knives, box cutters, screwdrivers, bottles, chains, automobiles, rocks, razor blades, and iron bars."

Schwaiger, the attorney representing the Pelaez Chavez family, said parsing the text of AB 1506 might come into play in this case, as to whether a rock in one hand and a hammer and a gardening tool in the other constitutes deadly weaponry. Schwaiger said that Bonta should investigate the shooting but probably won't.

Schwaiger questions not only if the deputy needed to take Pelaez Chavez's life, but if more could have been done to take him into custody alive.

The shooting was a culmination of several events that led to a barefoot Pelaez Chavez wandering deep in the hills of Geyserville as deputies closed in and a helicopter circled overhead.

The sheriff's communication center first received a phone call at 7:30 a.m. about a suspicious vehicle in Geyserville. At 8:20 a.m., the call center again received a report of a suspicious situation at a residence in Healdsburg. The resident said that someone had just tried to use a rock to break a window at his home.

A follow-up interview revealed that the homeowner said Pelaez Chavez walked onto his property carrying large rocks. He was not wearing any shoes. The resident said he armed himself for his own safety. Pelaez Chavez allegedly walked over to the exterior door of a bedroom and used a rock to smash the windowpane of the door, deputies said.

From there he went on foot to another residence in the same area, the Sheriff's Office said. He was carrying several more large rocks and went to the back of the residence. This homeowner also armed himself and told Pelaez Chavez to leave his property. Pelaez Chavez allegedly told the homeowner to shoot him.

Pelaez Chavez then fled southeast, where he found a Gator-style utility vehicle near a ranch storage area. He stole the vehicle and drove east on Thomas Road and then south on rural roads. Pelaez Chavez drove through two more ranch gates and then crashed the utility vehicle on a rural road. After that he fled on foot over dense hillsides, heavy brush, up steep terrain and through creeks with no shoes, deputies said. Before deputies could stop him, he had traveled about a mile in 45 minutes, they said.

Once deputies met up with Pelaez Chavez, they allege that he repeatedly made "nonsensical" statements and refused to drop the hammer, tiller and rock. On the body-worn camera footage, Pelaez Chavez can be seen and heard yelling. Deputies can also be heard discussing his mental health, mentioning whether he should be "5150'd," which means being detained in a psychiatric setting.

Dietrick then engaged with Pelaez Chavez, and allegedly told him to drop his weapons again. The Sheriff's Office said that Pelaez Chavez refused and continued to yell nonsensical statements. He dropped one river rock, bent over to get another and allegedly indicated that he was threatening to throw it at the deputy. On the body-worn camera footage, Pelaez Chavez drops his hand with a rock in it down to the ground and hunches down at the knees.

Dietrick then fired three rounds, striking Pelaez Chavez at 10:03 a.m. The Sheriff's Office alleges that the suspect had picked up another "cantaloupe-sized" rock and was poised to throw it, prompting the shots.

The deputies involved in the event are Dietrick and Deputy Anthony Powers. Both men are on administrative leave, the Sheriff's Office said.

Schwaiger says that people should watch the body-worn camera footage to see the stark difference between how Powers handled the situation versus Dietrick, the shooter.

"The approach that the two take, even leading up to David's death, is so remarkably different," he said.

Powers engages Pelaez Chavez in an attempt to calm him down, gives him space, "because there's nobody else around to get hurt," said Schwaiger.

"Powers is handling the situation by just creating more space, talking his time and trying to talk. He's asking him about his family, 'So do you want to call them?' and all this stuff. Then, as the situation progresses, Dietrick appears on the scene, he's yelling, 'Drop it drop it drop it' to a guy who doesn't speak English, is barefoot, standing on stones, yelling at the helicopter which is circling the air."

As can be seen on the body-worn footage, Pelaez Chavez then crouches over and is shot three times by Dietrick-- in the arm, chest and head.

"Frankly, the difference in approach between the two deputies is all you need to know," said Schwaiger. "It didn't have to go that way. One deputy didn't consider using deadly force. .. the other one pressed the situation unnecessarily and ended up killing a man."

Though the suspect's family says he has no history of mental illness, "he's obviously in some type of crisis," said Schwaiger. "That's undeniable."

Schwaiger said that federal law dictates that if a person is experiencing a mental health emergency or an emotional crisis, "that's a factor that weighs against the use of deadly force."

Schwaiger anticipates suing for wrongful death, excessive force, loss of familial association on behalf of Pelaez Chavez's children, and loss of consortium on behalf of his wife.

The Sonoma Sheriff's Office has released body-worn camera footage of the pursuit and shooting of Pelaez Chavez.

The first footage was released on Aug. 14 and can be seen at https://www.youtube.com/watch?v=ZFKzfpC10ys.

More footage was released Thursday and can be viewed at https://www.dropbox.com/sh/ffbj2we5pqi07l5/AADVd_PCDpKEqOzv_kYXVNzqa?dl=0.

Some video must be downloaded to view it in its entirety.