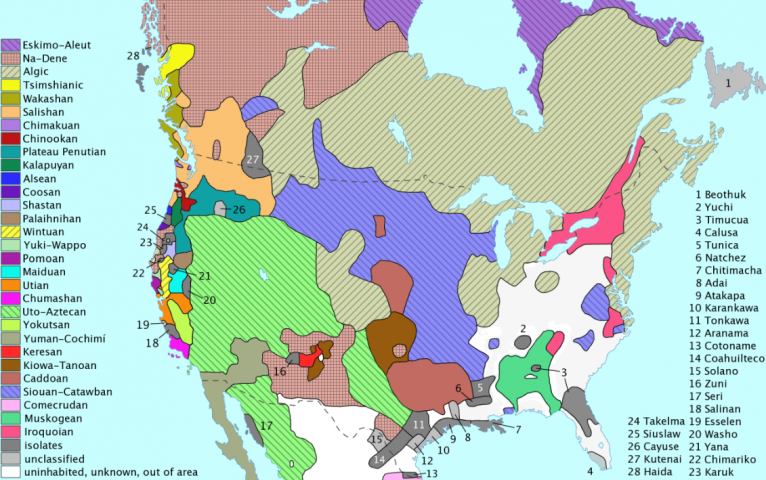 Before European contact, linguists say there were over 300 Native American languages spoken in North America. Fewer than half remain.

This summer, the federal Bureau of Indian Affairs announced it was awarding $7 million to American Indian and Alaska native tribes under the Living Languages Grant Program. The program is geared towards helping the tribes revitalize languages once thought to be lost.

The Wiyot Tribe of Humboldt are planning on using the funding to reclaim their language: Soulatluk.

The woman you’re hearing is Della Prince, the last fluent speaker of Soulatluk. She died in 1962, but her voice lives on through recordings.

She’s telling a Wiyot story that explains why eels have no ribs. In the story, eel starts to lose a gambling game, and eventually puts up everything he owns…including his ribs.

Because there are no living, fluent speakers of Soulatluk, the language must be reconstructed through old field notes, as well as recordings like the one you just heard.

Dr. Lynnika Butler is a linguist who works with the Wiyot Tribe. She’s devoted years to understanding Soulatluk.

“Trying to learn from…for the most part, very unorganized documents, not having a native speaker to just acquire it from in a natural way — makes it really hard,” Butler told KRCB News.

It doesn’t help that Soulatluk is an incredibly complex language, with linguistic features unfamiliar to English speakers.

Marnie Atkins is a member of the Wiyot Tribe, and runs the tribe’s cultural center. She works with Butler in trying to piece together Soulatluk, and says she’s had her own difficulties learning the language.

“As a learner, an adult learner, it’s hard,” Atkins said. “As a first language English speaker, what was hard for me was the sounds, we have some very different sounds in our language that you don’t in English, so making your mouth do those interesting sounds and not being afraid to spit a little bit [laughs] because the sounds are down here in your throat, making it sound like you’re clearing your throat or something…so making yourself humble, knowing that you’re going to mess up and you’re going to make these sounds that you’re not normally used to, and just going ahead and doing it.”

Many people try to learn their ancestral languages as a way to connect with their culture. For some, starting that process may be as easy as creating a Duolingo account. But Native American languages were nearly wiped out by European colonizers. Butler said Wiyot people were able to adapt Soulatluk to incorporate new objects brought by European settlers, like harmonicas.

“Some people might have this idea that oh, well, once the more modern language came along there was no place for this old, pre-contact language anymore,” Butler said. “ No, in fact, Soulatluk is really interesting among languages because it almost never borrowed an English word…Soulatluk speakers would just build a new word, on the fly. And so [Soulatluk word] is “what is bitten,” and it’s the word for harmonica.”

But ultimately, says Butler, their language was taken from them. Here’s Justin Spence, a professor in the Native American Studies Department at UC Davis.

“Moving into what in the late nineteenth century became, rather than outright attempts to exterminate Native American people, to instead get rid of their cultural practices, and essentially what is sometimes referred to as cultural genocide,” Spence said. “So there was a system of educational institutions that were set up to take children away from their families, put them in institutions where they would only learn English and not their traditional cultural practices, including language…there are lots of stories of people who were punished for speaking their ancestral language in those settings, and so I think a lot of people who had that experience made what I imagine was a very difficult decision to not transmit the language to younger generations.”

“I did not grow up learning Soulatluk,” Atkins said. “I came to it as an adult. And it wasn’t spoken in my home and it probably hasn’t been spoken since my…great grandmother, maybe grandmother…In my own family, I didn’t experience fear of speaking the language. It was more ‘I didn’t know it existed.’ When something is so, almost totally wiped out, that you don’t even know that there’s still something left, you don’t think it’s a possibility. So it takes adults like me to go ‘no, there still is remembrances, there still are recordings and documents, and look what we can do…’”

“She told me more than once, ‘I remember the adults speaking it around us when we were kids,’...she said something like ‘you know, we were just dummies for not trying to learn it’...it sounded like she felt like she had made a choice not to learn it, and I don’t think that was true at all,” Butler said. “I think that the adults were specifically talking amongst themselves and choosing — for their protection — to not pass it on to the kids.”

This year, three grants went to the Wiyot tribe to help them revitalize their language. Tribal members say they plan on using the Living Languages grant to create a series of videos aimed at making the language more accessible, like recording themselves using Soulatluk in their everyday lives; cooking a meal, or giving a tour of their home.

According to Atkins, finding grant funding hasn’t always been easy.

“It’s very competitive, and add to that we don’t have fluent living speakers,” Atkins said. “That has been in the past a very strong ‘you’ve got to check that box.’ We laid out our thesis, and we backed it up with evidence that, sure, Marnie doesn’t speak fluently, or Sam or whoever. But we do have speakers. And we do have all of this material…when you have the resources, human and materials, it is not moribund, the language is not dead. It has the ability to be reclaimed…Look at what we’ve done with hardly anything, all of these years. Look at what we’ve done. Imagine what we could do with proper funding. I mean, bring it on.”

For Atkins, revitalizing Soulatluk is connected to her culture…

“A lot of folks will kind of say well what’s the point, English is everywhere,” Atkins said. “You’re right, it’s everywhere…but, it’s relevant because…our language holds traditional knowledge that English doesn’t…as stewards and reciprocal partners with animals and land and water, indigenous people’s languages and sciences were built on the landscape…And you have to have the language to understand how that cultural and traditional land management practice happens.”

“So it’s this all-encompassing knowledge….that as you know who you are in the world, and how you carry yourself, and wherever you go in the world, you’re a Wiyot person,” Atkins said. “Because you know these things about yourself and your history and your family and your relations and your land.”

Atkins, who has worked to reclaim Soulatluk for over twenty years, has advice for other tribes undergoing the same process.

“Be easy on yourself, be patient with yourself, this is going to be hard work and you’re not going to do it overnight. And it’s ok. ,” Atkins said. “I’m old. I’m probably not going to be a fluent speaker by the time I leave this earth. But — I’m holding the line for others. To come after me. And that is just as important. If that’s your purpose then take it and run with it and do your best. Because you’re going to be holding it for someone else to come after you, to then take it even farther.”