Family of man slain by sheriff's deputy speaks out 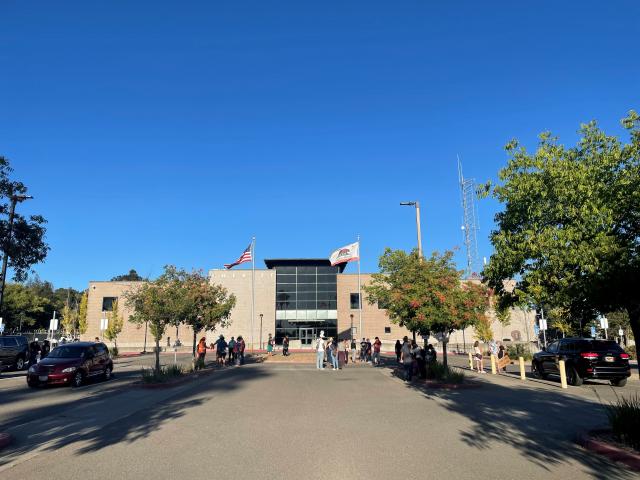 photo credit: Courtesy of KRCB/Noah Abrams
The Sonoma County Sheriff’s Office remains in the spotlight over the killing of a North Bay man in late July.
Bearing the heat Monday afternoon a supportive crowd gathered in front of the sheriff offices in Santa Rosa to hear testimony from the family, and supporters, of David Pelaez-Chavez, the Lake County man shot and killed by a Sonoma County Sheriff’s deputy nearly a month ago.
Pelaez-Chavez’s brother, Alfredo Pelaez, spoke to those gathered through the use of an interpreter.
"Quereoms justicia por David." Pelaez said. "We want justice for David. We are fighting, but we are fighting peacefully, because that's the way it should be. We don't want more violence." Pelaez said through the interpreter.
Robert Edmonds, who served as vice chair on the Andy Lopez Task Force and has long been involved in police accountability activism, spoke at yesterday’s press conference. He said the struggle for accountability continues.
"There are a lot of people here that have been at gatherings like this for decades in Sonoma County with very little change to how the system works and creating any way to keep this from happening again." Edmonds said. "The people who are in power, the board of supervisors, the elected sheriffs, continue to obstruct and append the will of the people. Even when we go to the ballot box."
The North Bay Organizing Project, a grassroots organizing coalition, co-organized the press conference. The group's youth organizer, Emanuel Morales, said he hopes to see oversight for the sake of future generations.
"I primarily work with young people and want to make sure that in their future that the police are held accountable, that there's transparency, that the community is also allowed to do our due diligence and have an independent investigation on incidents of fatalities at the hands of the police." Morales said.