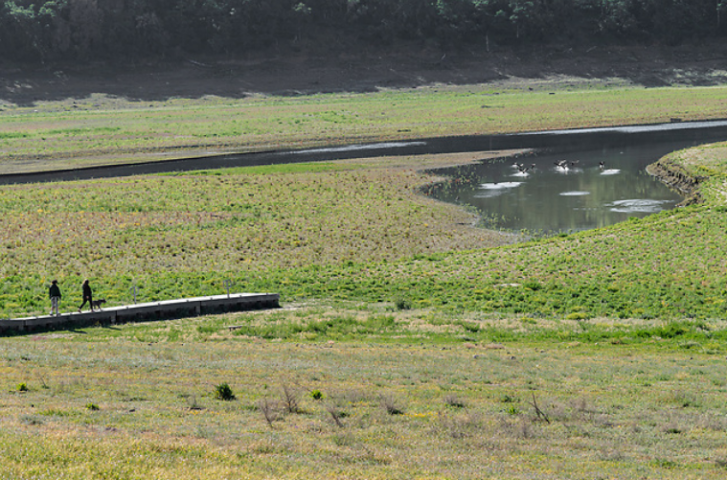 File photo of Lake Mendocino
photo credit: California Department of Water Resources
After more than three hours of deliberations, officials punted on a proposal significantly changing how the county issues permits for water wells, pushing any decision to September or October at the earliest.
While added scrutiny is coming, the board ultimately felt there were too many variables and too little public input to move forward.
The county is under legal threat over contentions that it approves groundwater wells with no meaningful study. Environmentalists contend those wells are reducing water levels in protected streams--and killing protected species.
Drevet Hunt with the California Coastkeeper Alliance, the group that brought legal action over how the county manages certain rivers and streams, called the proposal a start. But also one that fails to comply with the law.
"The appropriate approach we believe would be to enact an emergency regulation that would pause the issuance of groundwater well permits," he said.
Ultimately, that was a step the board opted not to take, though several members say they fear planning officials will be inundated with well applications once word spreads that a new, almost certainly more lengthy and costly process is imminent.
"I am not supportive of a moratorium, because that is a de-facto moratorium on every building development in the unincorporated areas of Sonoma County at this point. Like, we have areas that have good ground water," said Board of Supervisors Chair James Gore.
To truly safeguard the area's protected rivers and streams, Hunt said officials have to include everyone, not put the onus entirely on future applicants.
"An ordinance would need to require metering and monitoring on existing and new wells. I would also suggest that you direct the staff to take the time to develop accurate modeling of existing conditions and develop fair and feasible mitigation measures that result in sustainable groundwater resources and protect the public trust. I know that takes time, but it's something that needs to be done."
Supervisor Linda Hopkins suggested expenses for landowners related to water metering or data collection could be waived, though Supervisor Susan Gorin said that might appear unfair to residents in Sonoma Valley who've been paying those costs personally for a year.