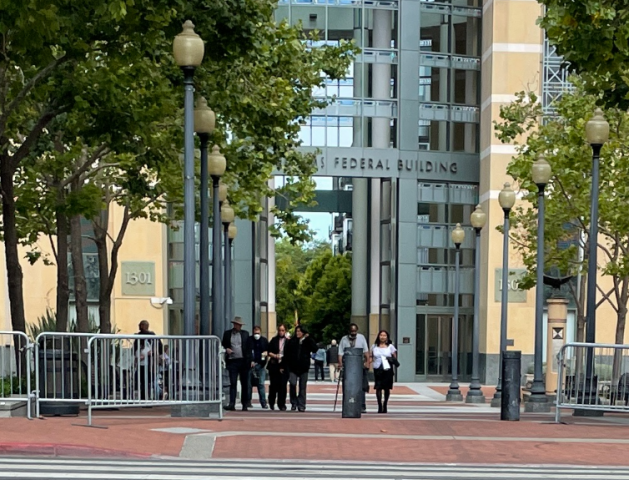 A temporary restraining order against Sonoma County and the city of Santa Rosa remains in place for the time being. That’s what a federal judge ruled Wednesday in an unusual case; one in which local unsheltered individuals are representing themselves in court.

The case is Mcloud v. County of Sonoma et. al. and in a federal court building in downtown Oakland, Denise Mcloud and co-plaintiff Brian Barnard asked the judge to continue to block local officials from clearing their encampment along the Joe Rodota Regional Trail. In an emotional appeal, Barnard said he couldn’t face moving yet again. One of plaintiffs’ arguments was that despite the county offering temporary shelter as an alternative to living along the trail, it’s only for 30 days, and then what?

“The placements are temporary…if they don't pass a background check they're back on the street,” said Denise Mcloud, speaking to KRCB after the hearing. She said she and the other people living along the trail want somewhere safe to be.

“We've never made it impossible for [trail users] to not have a path,” Mcloud said. “We clean up after ourselves, when we leave a spot, we don't leave it dirty for the county to come and clean up after us. We do that ourselves. So hopefully, you know, I'm gonna come back, ready to fight again.”

While District Judge Haywood Gilliam, Jr. said he didn’t believe the plaintiff’s had “freestanding rights to occupy this property indefinitely”, he wanted to get to the bottom of what the county and city of Santa Rosa legally authorized to do when clearing homeless encampments.

County attorney Josh Meyers argued the temporary restraining order should be dissolved because he alleged all seven of the named plaintiffs had been offered, and had accepted, alternative shelter–some in the form of hotel vouchers. So therefore, he said, the order was moot.

But the judge said he wanted a lot more detailed information from the county about temporary placement, and specifics on how the county was handling people’s belongings and property storage. Gilliam said if the county got that information to him by Friday morning, he’d consider lifting the restraining order, which would enable the county to resume clearing any encampments along the Rodota Trail.

KRCB asked Mcloud what she would like to see from the Sonoma County community.

“We’d just like some support…and I don't know, acknowledge us every now and then..just say hi or come and hang out with us,” Mcloud said.