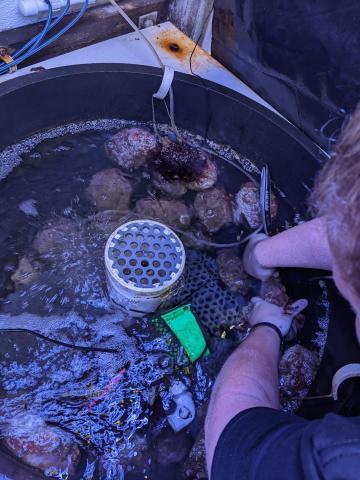 Using a spatula, Nora Frank eases a wild abalone, kept as broodstock, off the side of a tank
photo credit: Marc Albert/KRCB
Fished to near extinction, abalone, the hard-shell giant mollusks are about as rare as a marine hen's tooth. Two decades of strict protection under the federal Endangered Species Act have yet to reverse more than a century of overfishing. But an extreme federal effort underway in Sonoma County is showing promise to rescue one sub-species--the rare white abalone from oblivion.
Burbling water and the hum of refrigeration units drown out the crashing waves on a windswept rise near Bodega Head. Inside a non-descript shed, a small team of scientists are working to give this vanishing species a future.
"They broadcast spawn, which means males release sperm, females release eggs, they go up into the water column, they meet, they become babies and they settle back down."
That's Alyssa Frederick, a post doc with the captive white abalone breeding program at UC Davis' Bodega Marine Lab. The method worked fine until industrial scale fishing and a wasting disease erased their abundance.
"They are really, really bad about long distance relationships, so when there's only one percent of them left, there, there aren't males and females close enough together to make babies out in the wild." 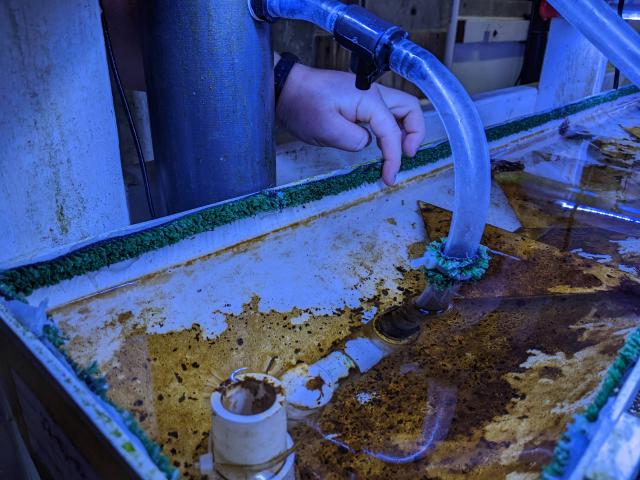 No bigger than a grain of rice, young abalone feast on yellowish diatoms. How many can you see?
photo credit: Marc Albert/KRCB
According to the National Oceanic and Atmospheric Administration, white abalone have produced few offspring since the early 1970s. Every abalone species faces similar challenges.
"All seven of them were overfished, apparently white abalone were the tastiest, and they were really overfished and we ended up overfishing ninety nine percent of the animals that existed in the wild."
Frederick and her team are a key part of the federal response.
"That's something that is a little more challenging to understand in the lab, because we give these animals everything that they need. These are the most pampered snails in the world. We basically run a very fancy reproductive spa for white abalone."
Because they live at depth, elaborate chillers cool the water to an ideal 14 Celsius. Filters set at several microns keep out toxins, including the cause of wasting disease. Dulse, a favorite food, is cultured in a tumbling tank, augmented by diatoms and harvested giant kelp.
Nora Frank, the lead technician here has a long list of daily chores. Assuring water temperature and quality, assessing health and vitality, feeding, tagging, cleaning and checking the lab's floor each morning for any escapees that slithered from a trough.
"We keep it really clean and sterile for our animals so we're walking on a mat that's going to sterilize the bottom of your shoes, and so anytime we go in and we're going to touch the animals, we sterilize our hands too,"
The sound of water is everywhere. Sturdy, hand build racks are loaded with dozens of troughs--basically PVC piping cut in half lengthwise. Off to one side, behind a black plastic curtain, mature abalone hold fast to the sides of their tanks. Accenting the space, hoses and tubes form orderly spaghetti-like runs delivering water and oxygen, the blue hued light and windowless space tacks closer to the Matrix, than an upscale resort.
It's unclear exactly why, but white abalone breed only in the spring. Naturally living fifty to 180 feet beneath the waves, it's unclear how they even know the season, but scientists have had little success in orchestrating off-season reproduction--even with artificial lighting mimicking the seasons. Frederick says there's still plenty science hasn't figured out.
"There's a potential that we're missing some of the really important cues that they might have gotten out in the wild, that they are not getting here and that's a big thing that we're trying to do, what are the things that we're missing? That we don't know about yet that we can then provide and make animals reproductive," Frank said. 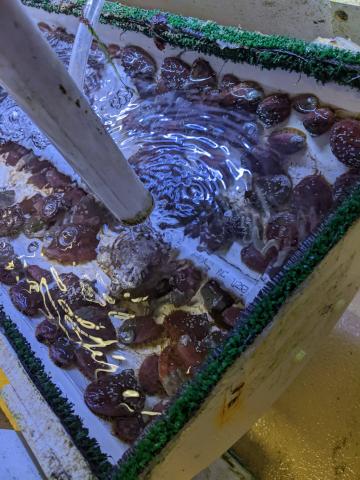 Like in the wild, these sexually mature captive bred abalone gather where there's wave motion
photo credit: Marc Albert/KRCB
Every spring since 2012, the abalone are moved into individual buckets arranged in a nearby greenhouse...Frank describes what happens next.
"So we turn on Marvin Gaye, for spawning we use a mix of Triph, which we use as a buffer and hydrogen peroxide that has free radicals in combination with seawater, so it doesn't do any harm to the abalone. It stresses them to a point where they want to release their gametes but we only leave them in for several hours, and we've seen pretty high success with these concentrations and then we put them back in their tanks afterwards and they seem to recover just fine."
While the methods and protocols are strictly followed, results are highly variable, Frederick explains.
"Our success over the last two years can range from zero percent, so we might do this and not a single animal spawns, to like forty percent and that's just whether they spawn, yes-or-no. We had one animal produce twenty million eggs one year, that's more than multiple animals combined in other years, so it varies a lot and we're doing the same thing I mean, our protocols are down to a very specific recipe of what the animals get. Sometimes they are ready to go and sometimes they are not." 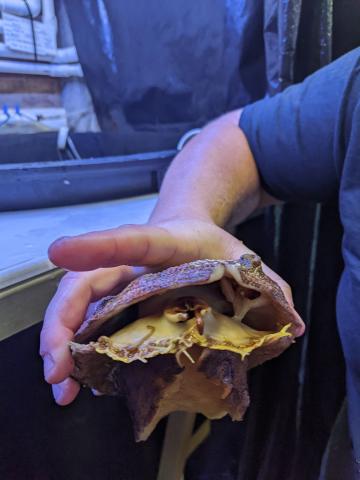 "Mr. DeMille, I'm ready for my close-up." A rare look at an abalone's face--note the twin eye stalks
photo credit: Marc Albert/KRCB
The gametes are mixed and, like in the wild, the tiny larvae float for about a week before settling.
"Another part of our research is trying to increase that survival, just a little bit, because you can imagine, if you have a million animals and even one percent survive to a year, if you can double that to two percent, that's a huge number of animals," she said.
For the last three years, scientists with NOAA-fisheries have been releasing, or planting thousands of white abalone raised in Bodega Bay into waters off southern California. Periodically checking the chilly depths with remote-controlled mini subs.
"The goal is to have enough out there eventually that they're reproducing in the wild again."
How long that might take, in the context of other pressures on the marine environment, remain to be seen.
"The reality is that these are really small, cryptic animals, and it might take a few years for us to really know just how successful those efforts are," she said.