Fates of fish and flow of the Eel River still uncertain 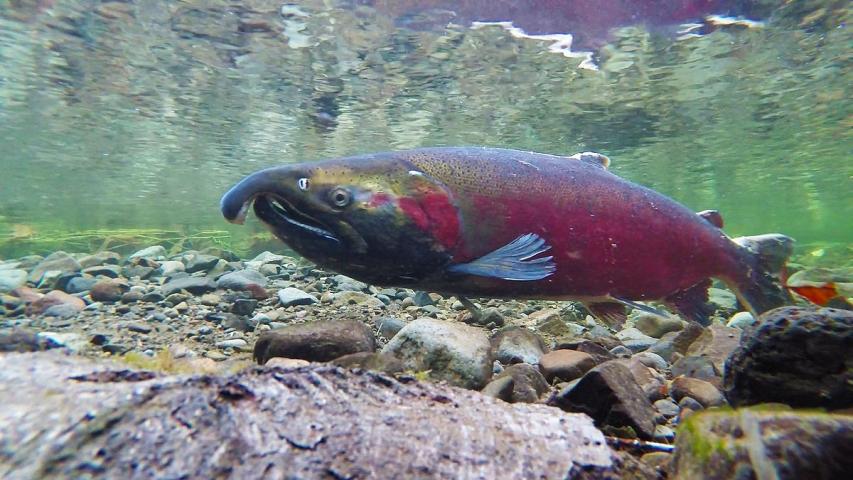 photo credit: Courtesy of Bureau of Land Management
The Potter Valley Project is a century-plus-old hydroelectric plant north of Ukiah. Owned by Pacific Gas and Electric, it transfers water from the Eel River to the Russian River, providing drinking water to many in Sonoma County. But big changes are on the way.
"Everyone who is a PG&E customer is currently paying PG&E to run these facilities, kill fish and not determine the proper solution." Redgie Collins said. "They need to step up to the plate and be the stewards in the environment that they claim to be in order to move this process as quickly as possible."
That's how Collins, with the conservation group California Trout, described PG&E's handling of the Potter Valley Project. Cal Trout’s criticism follows a letter to federal agencies claiming PG&E fails to protect endangered salmon and trout populations in the Eel River, below the dams of the Project.
On behalf of the utility, PG&E spokesperson Deanna Contreras said in a statement emailed to KRCB the company is “strongly committed to environmental responsibility,” and that PG&E runs the Potter Valley Project in full accordance with federal regulations. That's including how many endangered fish can legally be killed, otherwise known as incidental take, under its operating license.
Fish protection is part of a larger fight over the future of the Potter Valley Project, which consists of two dams, a powerhouse, and a water diversion tunnel between the Eel and Russian rivers, all of which PG&E is in the process of surrendering and decommissioning.
On July 8th, PG&E submitted a two and a half year timeline for the decommissioning plan. Matt Crawford, an attorney with the advocacy group Trout Unlimited, said for the endangered fish, time is critical.
"These dams, I mean, the fact is they're obsolete and they generate a really small amount of power by modern standards." Crawford said. "They've been losing money for years and they need to come out and there is some urgency to this because the dams are killing fish right now with warmer water. The fish should be up in the headwaters where it's, you know, clear cold water this time of the year. Instead they're forced below these dams and the fish of the Eel are suffering and they haven't got a lot of time left, frankly."
Charlie Schneider, also with Trout Unlimited, said the only certain thing about the Potter Valley Project is that change is coming.
"The project will never operate as it has historically." Schneider said. "And I think that's probably the biggest thing people need to realize is that it's going to be different. Someone else is going to have to pay for it because PG&E doesn't want it anymore. And as to now, no one has stepped forward to take it over in part, because it is so expensive. There's no maintaining the status quo. At this point, there has to be a new solution."
Contreras said PG&E hasn’t yet decided “whether facilities will be removed or remain in place."
Through Contreras, the utility also said there are many stakeholders in what will eventually happen to the dam infrastructure and that the company’s timeline allows for “input from these stakeholders to inform PG&E’s ultimate decommissioning proposal."
Meanwhile, Trout Unlimited's Schneider said a workable solution has already been presented.
"We think there's a pretty obvious one." Schneider said. "That'll have important ecological and fisheries benefits in the Eel which stakeholders in the Eel care a lot about and viable solutions to continue water diversions into the Russian that the Russian users really care about. There's a win-win on the table there."
That plan is called the ‘two-basin solution’. Those behind the idea include Cal Trout, Trout Unlimited, the Round Valley Indian Tribes, and the Mendocino Inland Water and Power Commission; but their attempt to take control of the Potter Valley Project was denied by the Federal Energy Regulatory Commission. Regardless, Collins of Cal Trout said he believes PG&E should implement the ‘two-basin solution’ anyway.
"We've really thought we put together a plan that can work." Collins said. "It represents a compromise between the two basins and we've done two and a half, three million worth of studies that show that's possible. And so we have a solution ready, and we're ready for PG&E to take leadership and step up rather than recreate a stakeholder process that we think we've already conducted pretty effectively."
While Schneider, Crawford, and Collins all agree the Eel River will follow the Klamath as the site of California’s next great dam removal, which they say would make the Eel the longest free flowing river in California, the ultimate fate of the Potter Valley Project is still being worked out.