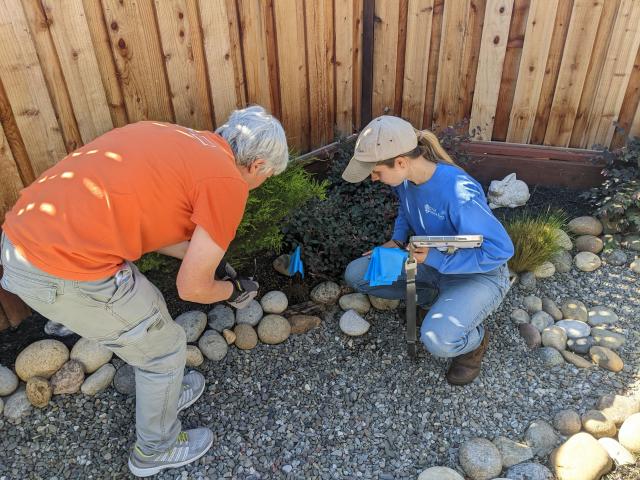 Holly Nadeau (right) and homeowner Jennifer Kruse locate a drip emitter irrigating bare ground.
photo credit: Marc Albert/KRCB
Small savings add up. With droughts seemingly longer and more frequent, utilities across California are begging customers to cut usage by a fifth. In Sonoma County, Santa Rosa's WaterSmart initiative, is helping that city go above and beyond.
In a story last week, we took you along as utility technicians scoured homes for leaks, tested faucets and shared conservation strategies. In the second in our series, we focus on the incentives, encouragement and technology helping drive conservation.
Though she'll miss croquet on a lush lawn, Sue Grave says she is prioritizing.
"I want drinking water, and I want water for the next generations, you know, people after us too," Grave said.
When Holly Nadeau with Santa Rosa Water pulled up to Grave's home off Mendocino Avenue near Santa Rosa High, it was hardly turf--more the color of the surrounding hills, cured by the summer sun. She informs Nadeau that she'd ceased watering, ahead of the visit.
"I can see that," Nadeau replied with a laugh. "I know, at this point, thank you, we appreciate that you've been doing your part to conserve water, we would normally ask that folks, or require--in order to be prequalified--that the lawn's been maintained and regularly irrigated, but because of the drought we're not punishing people for helping us meet our water saving goals, so that's not a requirement at this time, it's suspended, for now, so I can see I can prequalify the front and now, I'll just have to see the backyard."
Nadeau was performing a "pre-inspection" for the utility's 'Cash for Grass' incentive. That's a program paying a dollar-a-square-foot bounty to replace thirsty lawns with drought tolerant plants.
Sprinklers will have to come out, or at least be capped, replaced with a drip system. One not using micro-sprayers--a type of drip emitter that can deliver up to twenty times as much water as other types.
While 'Cash for Grass' is all about removing one of the most thirsty aspects of the average American home, it's also about habitat. Rocks, gravel, cement, rubber mulch and Astroturf are all no-nos when it comes to replacing the removed grass.
Around a backyard table, Nadeau hands Grave a hand-sized tool for envisioning a yard beyond grass.
"I would hate to forget this---you can keep this deck of plant cards," Nadeau said.
"Oh good, so these cards have the plants on that I should get?' asked Grave, excited to begin making choices.
"Yes," Nadeau replied. "And these are just a great sample of some of the plants that are out there that are really great for these conversion projects."
Water-smart plants on a drip system use an average 18 gallons less per year than grass--per square foot.
With the inspection done, Grave is readying to get to work. .
"Now that you've been here, I can start putting down cardboard, compost and mulch," Grave said. "Because that would stop the weeds and what have you."
Under the program, she'll have eight months to finish and schedule a re-inspection, or ask for an extension.
Measured against the missing storms and depleted reservoirs, Grave's grass may seem like a drop in a bucket. Far from it.
"Our customers have removed almost 4 million square feet of grass, so, we're at 3.85 million square feet of grass have been removed in Santa Rosa," said Claire Nordlie, the utility's water use efficiency coordinator, with the cumulative impact since the effort launched 13 years ago.
While that works out to about half the size of Bennett Valley Golf Course, Nordlie said locals are setting an example. .
"To put that in perspective, the Metropolitan Water District (MWD) of Southern California, over about the same time, they've removed seven million square feet; we've removed almost four million in that same time with a population a fraction of theirs," she said.
That's hardly an exaggeration. MWD supplies 19 million people. Santa Rosa water serves about 56,000 households.
Over the past year, Nordlie, Nadeau and others with the utility have been getting busier. That's in part because of technology. New water meters enable almost real time information sharing through the utility's WaterSmart portal. One can see hourly usage and identify a problem long before a bill arrives. Alerts can be set for unusual use, exceeding a daily, weekly or monthly threshold and can be monitored when out of town.
"I wish everybody was on it," said Nordlie. "I wish everybody set up these leak alerts because I think they are so powerful to be able to see what's going on, so you're not surprised by a huge water bill if there's a spike, a leak, an issue."
That's part of what prompted Jennifer Kruse to sign up. A search turned up buried emitters watering bare ground and a few other issues, but the biggest one: something seemingly common, a user unfriendly irrigation controller.
"If I can figure out how to use the stupid thing, I'd be quite happy," Kruse said, clearly exasperated. "We ended up using 7,000 gallons the first month we were here, the second month, 4,000 gallons, and then when the power went out, we didn't realize when we re-set it."
With more incentives and rebates, participation is up---and so is the water savings. According to a rough estimate by Nordlie, the average water smart checkup audit saves 17,160 gallons annually. Add in 'Cash for Grass', and the total works out to about 850 acre feet. That's enough to supply roughly 3,500 households for a year.
With a bit less than a quarter of Santa Rosa Water's customers signing up for a checkup, there's plenty of potential savings out there---and much more statewide if similar efforts are propagated across California.
You can find out more about Santa Rosa's home check ups, have an in-person inspection, find out about rebates and the city's WaterSmart portal by visiting https://www.srcity.org/827/WaterSmart-Home.
A similar programs are also available in Petaluma...you can find out more by visiting https://cityofpetaluma.org/water-wise-house-call/