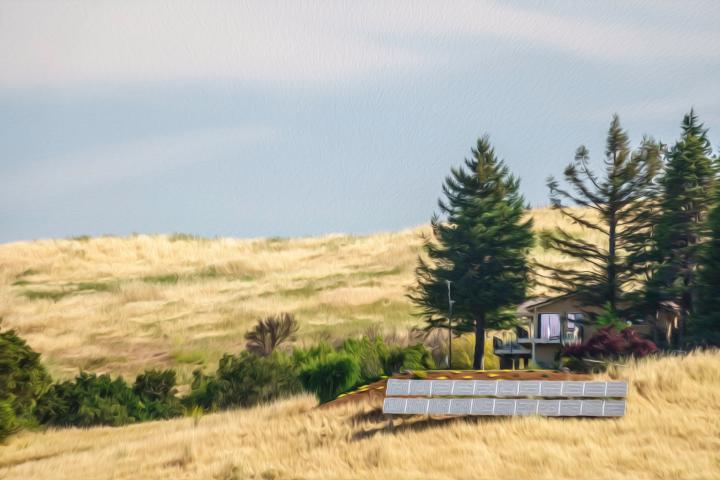 photo credit:
For the foreseeable future, Sonoma County residents can continue to access low-interest loans to cover costs like retrofitting a house for earthquakes, installing a greywater or solar system on a ranch or buying a pool cover.
There are now about 125 distinct projects eligible for county financing; the whole point is to reduce greenhouse gasses and fight climate change,
"Through energy efficiency, water conservation, and renewable energy," said Jane Elias, one of the county staffers who runs SCEIP. That stands for Sonoma County Energy Independence Program, and for over a decade, it’s been helping county property owners be safer and save energy and water.
Money is available for residential, commercial, industrial, agricultural, multifamily and certain nonprofit projects. It has a fixed interest rate, now 6.99%. But there’s no money down, no income or credit qualifying and minimal fees. And it’s run by the county government, so there’s no profit-making incentive or shady deals.
But SCEIP has ongoing financial issues. Once again, hat in hand, program staff had to go to the board of supervisors this month and ask for a loan to keep it going.
"There's no surprise that we're here today," said Supervisor David Rabbitt. "Every time we've had the bond reauthorizations for the last, what, three, four times probably it's been…’around the corner, around the corner, what are we gonna do? What are we gonna do?’ The business model no longer works. SCEIP is losing money."
Rabbitt says he wants to see the loan program restructured.
"It was a jobs program, it came out of the recession as a way to keep the contractors busy, who are all going belly up and going bankrupt," Rabbitt said. "So that's what the real focus was initially. I think it's been great...going forward, make no mistake, I'm in favor of energy, upgrades and programs to achieve that."
Despite his reservations, the supervisors unanimously voted to indeed provide the necessary loan from the county general fund to continue SCEIP, rather than move to dismantle it.
"I certainly support this, because I think this is an absolutely critical tool in our toolbox," said Supervisor Lynda Hopkins. "Yes, you're helping individual people, but as a whole you're decarbonizing the economy, and really the only way to do that is one person at a time."
She said there’s no rules against the county providing subsidies for the program’s overhead.
"We have a lot of different programs that are not full cost recovery, right? Transit. Kind of the highest cost recovery I think in the country is New York City, which still falls short of a hundred percent farebox recovery," Hopkins said. "And you know, this is a meaningful tool to achieve decarbonization."
Towards that end, as Jane Elias explained in a recent presentation to the board, the program not only lends money.
"We lend over 100 specialized—and generally expensive—tools for individuals wanting to get into this type of industry," Elias said. "We partnered with the library and other agencies to bring to the community, the do it yourself, energy and water savings toolkits. Currently there are over 30 of these kits available for checkout across the various library branches."
Elias said the way the economy is going, SCEIP will likely be needed even more.
"The program remains a viable financing choice for Sonoma County property owners, especially since the program expanded to include wildfire, safety and seismic," Elias said. "And with higher inflation and interest rates, the program will be a critical financing opportunity for underserved residents as traditional lenders tighten their underwriting criteria."
More information can be found here.