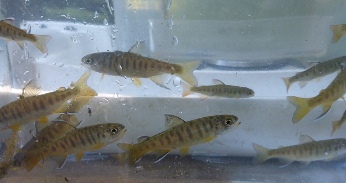 Salmon smolts rescued from a dewatered Felta creek in 2015, later released into the Russian River
photo credit: California Department of Fish & Wildlife
New rules that would add additional studies and raise the price of new ground water wells in Sonoma County aren't enough to end a legal challenge by environmentalists.
The proposed rules are aimed at settling a lawsuit accusing the county of worsening the plight of endangered fish.
Daniel Cooper, an attorney for the California Coastkeeper Alliance, said the initiative has no teeth.
"This is not the solution. It's primary problem is there's just no standards. There's nothing there, it's entirely within the discretion of the enforcement agency or the Board of Supervisors as to what to do and how they would even determine if a new well would hurt fish. There's no criteria, there's no objective criteria whatsoever, it's all subjective hand waving at this point," he said.
The proposed rules, released Monday, require hydrological studies of the impacts on certain waterways, including the Russian River, before a new well may be drilled.
Cooper said the county's new plan is unlikely to prompt the suit to be dropped.
"We'll probably be adding the ordinance, challenging the ordinance and adding that to our lawsuit."
The group's legal challenge accuses county government staff of failing to consider the cumulative impacts of hundreds of groundwater wells.
The Coastkeeper Alliance contends that makes local authorities derelict in their responsibilities to protect streams and rivers considered navigable waterways and thus subject to some federal protection.
Despite strong words, Cooper said there's still a chance for a meeting of the minds.
"The negotiations themselves are confidential, but we did negotiate with the county for a little over a year and they cut off negotiations about a month ago and this is their response, is this, in our view, largely meaningless ordinance. our hope would be that the Supes would perhaps amend it, listen to what we have to say, rather than to face a lawsuit, but we'll see."