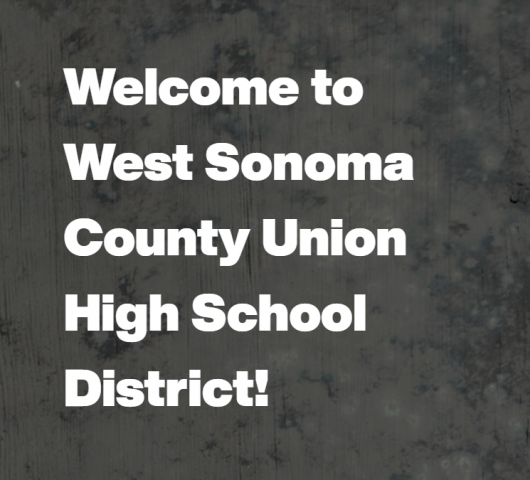 A screenshot of the district's homepage message.
photo credit: Courtesy of the WSCUHSD

Public school districts in western Sonoma County might look different in a few years according to options laid out in a new report. The West Sonoma County Union High School District has asked experts to look at more consolidation.

“They have a structural deficit, meaning that their program, and their operation as it now exists…has the need for changes," Herrington told KRCB. "And that’s why the high school district asked for the study. They know they have to make some changes.”

Part of the problem is dwindling enrollment in county public schools, which has declined just over 16% in the past four years.

"Sonoma County public schools has experienced a greater decline than the normal because of our four federal-aid disaster fires, one federal disaster flood, and the pandemic, and the cost of living," Herrington said. "When you look at west Sonoma County as a whole…the entire population base on that side of the county has had a greater decline than the metropolitan base."
But the solution isn’t just as simple as combining districts. School districts are not all funded the same way. Some, called state-aid districts, get most of their money from California's statewide budget. Others, called community-funded or basic-aid districts, are funded entirely through property taxes.
“All school districts are paid differently," said Linda Irving, superintendent of Sebastopol Union School District.  "It seems like this should be easy, right, from the public’s perspective. There’s forty school districts in Sonoma County, why don’t they just combine; but we’re all paid different amounts for students."

The study was conducted by a third-party auditor, and it lays out three different options, including a full unification of the high school district with the other ten west county districts. Still, Irving emphasizes, no immediate changes are imminent.

“This was a financial audit, to see if the schools combine, what would be the financial impact?" Irving said. "There’s another study that looks at program…so we’re just at the very, very beginning stages.”

There's a special school board meeting called for July 28. That's when the board will hear an update on and discuss the "Unification Feasibility" study.