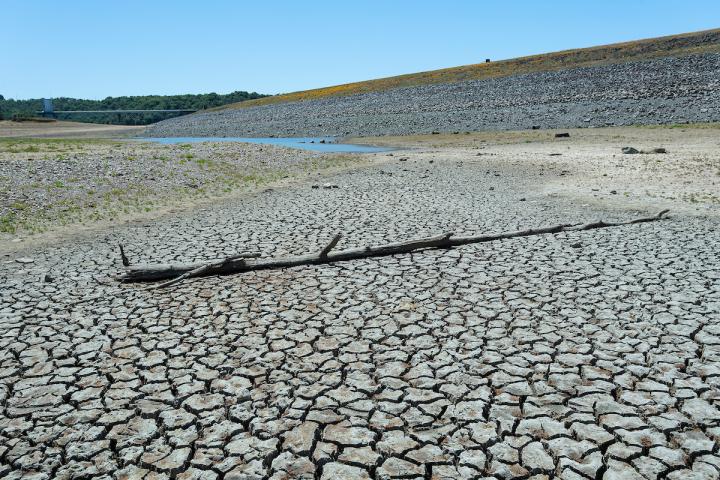 File photo of Lake Mendocino
photo credit: Credit: California Department of Water Resources
Conservation will help the North Bay survive a third drought year, but growing signs suggest California winters are growing less and less reliable.
Water supplies are about where they were last year at this time. Officials said at a town hall meeting hosted by Sonoma Water Thursday...that means a repeat of extreme conservation measures and more reliance on ground water should be enough.
Brooke Bingaman, a forecaster with the National Weather Service, notes a fourth year of drought is possible. She says early analysis shows La Nina conditions may continue, at least though part of the coming winter. While La Nina is generally associated with drought in California, Bingaman said that's not always so.
Nevertheless she said, significant long-term pattern changes are afoot.
"What climate research is showing is that droughts are becoming more frequent and they are often lasting for more than just one year."
Seasonal conditions are also growing more erratic, she says, citing last year.
"October and December were very wet months, well above normal, but yet November, and especially January and February were extremely dry. Our winters now, it's no longer a gradual rain throughout those wet months, its feast or famine. We either get an atmospheric river that brings us a lot of rain all at one time, or we have periods where we are very dry and below normal."
That's a problem when the state's reservoirs are designed to capture a steady stream of runoff or melting snow. In addition to conservation, and studying raising dam heights, officials are developing plans to use subsurface aquifers as supplemental reservoirs--pumping water deep underground in times of plenty, and withdrawing it when necessary.
Scarcity is also impacting local recreation. Toxic blooms of cyanobacteria, a type of blue green algae...are marring Santa Rosa's Spring Lake and showing up in doldrums on the Russian River. Officials warned pet owners to be especially vigilant, as algae contact can kill dogs. People are urged to shower after swimming.