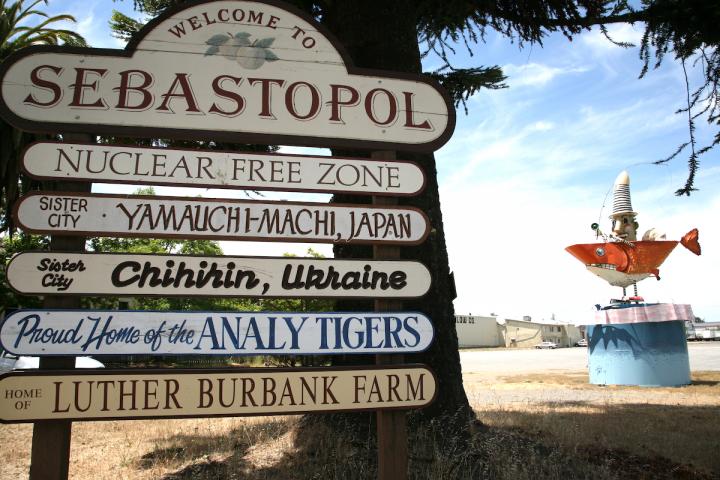 photo credit: Courtesy of Scott Beale/flickr
Many in the RV’s and camper vans that once lined Morris Street in Sebastopol now reside in a sanctioned village. Sebastopol city staff recently provided an update on the months-old project.
Elderberry Commons, Park Village, Horizon Shine. The three supportive housing sites within Sebastopol have met opposition, even as their purpose is to help alleviate homelessness.
At a recent virtual town hall, Sebastopol councilmember Una Glass noted the success of Park Village, a renovated mobile home park that houses very low income and formerly homeless individuals.
"The cost of running Park Village has gone down rather than gone up, even though we're housing more people." Glass said. "And that's because we're partnering with a nonprofit that knows how to bring more money to bear on the issue and on the problem and to provide the services."
That partner is West County Community Services. WCCS's Dannielle Danforth:
"Two of those new units were specifically pads for people and RVs that were living on Morris Street." Danforth said. "We've actually brought five units off of Morris Street, directly into Park Village and, and housed some of them."
Adrienne Lauby, president of Sonoma Applied Village Services, or SAVS, spoke about their project Horizon Shine Village, that provides a space and services to most of the people formerly living on Morris Street. She said the first four and half months of the project have been mostly successful.
"We don't have complaints from the immediate neighbors." Lauby said. "I think a lot of the fears people had, have dissipated. We did have trouble originally because we didn't have electricity from PG&E for two and a half months. So there was generator noise. Obviously the police department is happy because they don't have to do the kind of work they were doing on Morris Street before we opened. I just want to emphasize that it's costing Sebastopol taxpayers $0 to do this."