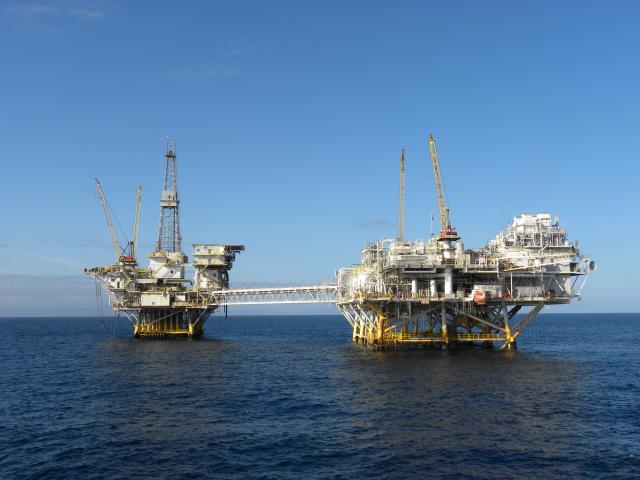 photo credit: Courtesy the Bureau of Safety and Environmental Enforcement/flickr
Releasing controversial news right before a long holiday weekend: the classic tactic was used again July 1. This time it was by the Department of the Interior, which released a draft proposal to allow new offshore oil drilling.
Quietly published on Friday afternoon, it's the newest proposed five-year program for the country's offshore oil and gas drilling. Released by the Bureau of Ocean Energy Management, a division of the Department of the Interior, the plan offers eleven new offshore drilling leases between 2023 and 2028. Ten in the Gulf of Mexico and one in Alaska.
Valerie Cleland, with the National Resources Defense Council, or NRDC, said this draft program is in line with current policy, but not yet set in stone.
"They do say that they would consider a plan that has no lease sales, but this is very much a business as usual offshore drilling plan." Cleland said. "The current five year plan is from the Obama administration and it also had 11 lease sales."
Congressman Jared Huffman, who’s district covers much of Sonoma County, and who chairs the Natural Resources Subcommittee on Water, Oceans and Wildlife, condemned the plan.
“Offshore drilling poses unacceptable risks, and the science and public opinion are clear: we should not put our…planet at risk just to enrich the fossil fuel industry." Huffman said in a press release.
Cleland acknowledges Huffman’s efforts to stop offshore leasing, including legislation he introduced last year to protect West Coast and Alaskan federal waters from more drilling, but she said stopping all leases remains a challenge.
"So it's much harder to protect areas where there is already drilling versus areas that have yet to see that." Cleland said.
Cleland noted though, these leases do not equate to immediate lower fuel costs or even more drilling.
"New offshore oil and gas leasing, even if it started tomorrow it’s not gonna lower prices at the pump." Cleland said. "Once an oil and gas company has a lease, they can sit on it for as long as they want; more than 75% of offshore oil and gas leases aren't being used."
Huffman, a former NRDC lawyer himself, said similar in a written statement which followed the proposal’s release.
“Handing over any new leases won’t lower prices by a cent – it will only pad their pockets while fueling the climate crisis," said Huffman, saying he hopes the federal government will revise the coming 5-year plan to exclude all new leases.
Cleland said new leases raise the risk of new spills as well.
"When we have oil spills, like the one in Huntington beach in California, those were not new lease sales." Cleland said. "Those were old lease sales that are continuing to get drilled. A lease sale in this five year program could mean an oil spill in 20 years."
And she said new leases won’t have any effect on production for years to come.
"So even if we stopped all new leasing tomorrow, current production would remain essentially the same for the next decade." Cleland said. "Our current capacity for refining, we're almost at capacity."
The newly released draft plan now enters a 90 day public comment period. Those wishing to submit or view public comments can do so here.
There will also be four virtual public meetings on the proposed leases, scheduled for August 23, 25, 29, and 31. More information can be found online here.