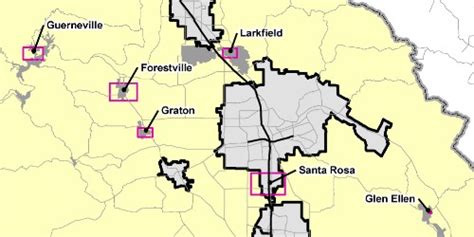 An earlier effort designated several unincorporated places that could accommodate more housing.
photo credit: Courtesy of the County of Sonoma
Rural aspects of the county would be plowed under, and those on the margins need protection from displacement were among the main themes as officials last week considered what to include in environmental studies of new, state-assigned housing goals. The county's must make it bureaucratically possible to add close to four thousand homes to rural and semi-rural parts of the county by 2031. Locals want officials to preserve rural character, and avoid displacement.
Fred Allebach was among those who spoke last week, telling county planners they have a tall order.
"This kinda puts the county in a bad spot," Allebach said. "But there's really nothing you can do, it seems like you're going to have to upzone and there's going to be the impacts and tough luck because there's 3,800 units that have to be accounted for."
A bad spot may be an under statement. State officials, mindful of stratospheric home prices, have told the county it must clear the way bureaucratically for 3,881 new housing units to rise by 2031.
The previous eight year period assigned the county 515 units. Those figures are for county administered areas only---each city has its own target.
The county doesn't, and won't build homes. It will however, have to find places where building can happen, and if there isn't enough, change zoning rules until there is.
Officials say the most likely route would be rezoning places considered 'urban service areas,' generally unincorporated towns.
Allebach noted that boosting supply can actually drive prices up, if new construction replaces simpler, older structures.
"I just want to caution against the urban renewal effect of assuming that market rate housing could offset displacement of people, because even people who are making median income can't afford prices," Allebach said.
Speaker Katelin, who did not provide a last name when addressing the meeting, urged displacement be included.
"It does seem like something that the housing element really should address because of how many thousands of people have already had to leave the county because they can't afford to live here, and will in the future, unless we do something different," she said.