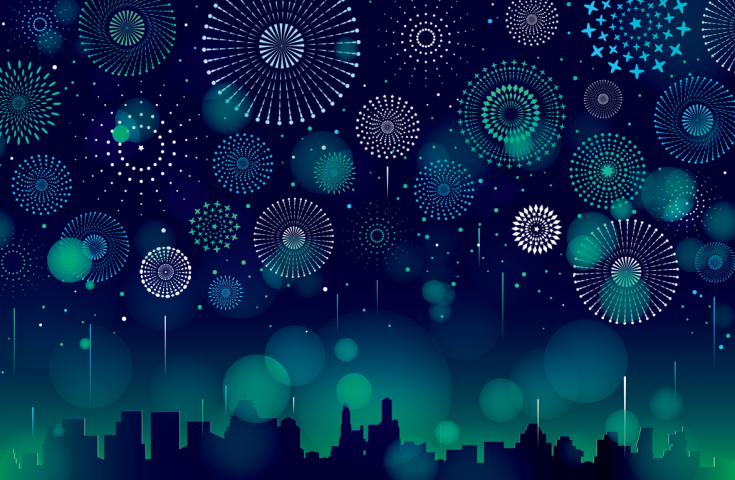 photo credit:
After two years of pandemic cancellations, Fourth of July in Sonoma County is back in full swing. Scroll down to get links for more information.
Events in Cloverdale include time-honored classics like the fireworks at Cloverdale High School, as well as the first annual Cloverdale Fourth of July Faire and Parade, which promises food, carnival games, and live music. Fireworks, put on by the Cloverdale Lions Club, start at 9:00 p.m., while the parade begins at 9:00 a.m. downtown.
Neena Hanchett, director of the Cloverdale Chamber of Commerce, has high hopes for the new event.
“We have a lot of volunteers involved…the whole thing, it takes people, it takes people committed to doing it, but I think it’s gonna be a ton of fun," Hanchett said. "Cloverdale’s always been about that.”
The Rotary Club of Healdsburg will host a kids’ parade and duck dash on Monday morning, starting at Healdsburg Plaza at 10:00 a.m. In the evening, the American Legion-organized firework display will begin in the evening at 9:00 p.m. at the town’s high school.
Mark Themig, community services director for the City of Healdsburg, said he thinks excitement is high after a long absence.
“The fireworks were postponed for the first two years, so during '20 and '21," Themig said. "'20 was mainly because of Covid…'21 was mostly because of super dry conditions…I think people are looking forward to a Fourth of July celebration week…this will be the first time in a couple years that both activities are coming back.”
The Kenwood Rotary Club will be putting on a day-long celebration on Monday, starting with a morning parade at 10:30 a.m. and ending with a late-afternoon shindig. Other activities include a morning race, with 10 kilometer and 3 kilometer routes, as well as a hike up Bald Mountain to see fireworks displays across the Bay Area at 7:00 p.m.
The City of Sonoma is hosting a July 4th parade at its town plaza, beginning at 10:00 a.m., followed by fireworks.
In Santa Rosa, the Santa Rosa Symphony and Transcendence Theater Company have teamed up to provide a night full of fireworks and music at the Green Music Center, starting at 7:30 p.m. There will also be a Kids Zone beginning at 4:30 p.m., which boasts carnival games, food, and bounce houses.
Missing from this year's festivities is Red White and Boom; though the organizer’s website promises a possible return next year.
Cloverdale fireworks: https://www.facebook.com/CloverdaleLionsClub/
Cloverdale Faire and Parade: https://cloverdalechamber.com/experience-cloverdale/annual-events/4th-of-july-happy-birthday-cloverdale-usa/
Healdsburg Duck Dash: https://www.rotaryclubofhealdsburgsunrise.org/
Healdsburg fireworks: https://healdsburgisheavenly.com/event/4th-of-july-fireworks-2022-07-04/2022-07-04/
Kenwood parade and shindig: https://kenwoodparade.org/ and https://www.happeningsonomacounty.com/events/kenwood-july-fourth-parade-rotary-shindig/
Kenwood footrace: https://www.kenwoodfootrace.com/race-info
Bald Mountain hike: https://www.sonomavalley.com/event/4th-of-july-fireworks-hike/17002/
City of Sonoma parade: https://www.sonomacity.org/event/sonomas-hometown-4th-of-july-parade-celebration-and-fireworks-show/
Santa Rosa fireworks show: https://gmc.sonoma.edu/4th-of-july-fireworks-spectacular/