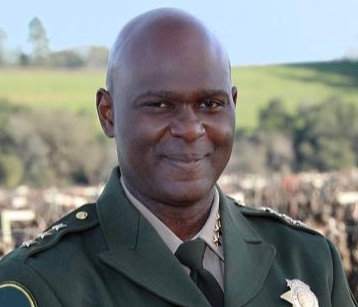 photo credit: Courtesy of Eddie Engram
The race for Sonoma County sheriff is finally decided. Eddie Engram, the frontrunner and current assistant sheriff has secured victory with over 50% of the vote. As ballots from the June 7th election trickled in, Engram's hold on the margin above 50% needed to avoid a runoff was confirmed.
He said his goals for the position remain the same.
"Increased services within the jail increase diversity within the office of public safety, which of course is our number one priority and different response to mental health and community engagement." Engram said.
Reflecting on the broader political dynamics of the race, Jerry Threet, the former IOLERO director - the county’s independent law enforcement oversight office - said acceptance of the need for greater oversight by the candidates came as a surprise.
"One thing that was really striking to me about the race was how quickly all of the candidates adopted a platform of reform and transparency in civilian oversight, which I think signaled the sort of seismic shift that happened with measure P passing by a large majority." Threet said.
Carl Tennebaum is the self-described reformist candidate who came second to Engram. He said despite losing, he felt the results show a strong desire for reform within county law enforcement. He said national narratives about crime and safety can distort the reality on the ground.
"People really want to be comforted knowing that there's very firm law enforcement, the sort of law and order mentality." Tennenbaum said. "A lot of that comes from the fear mongering and the fear based messaging that we're getting a lot of. Cause the reality is we don't have any major crime problems. We're not a high crime county."
Engram said now he looks forward to fulfilling his goals for the office.
"Really, what I want to continue to do is provide quality public safety from the Sheriff's office and look forward to making some of the changes that I talked about." Engram said.