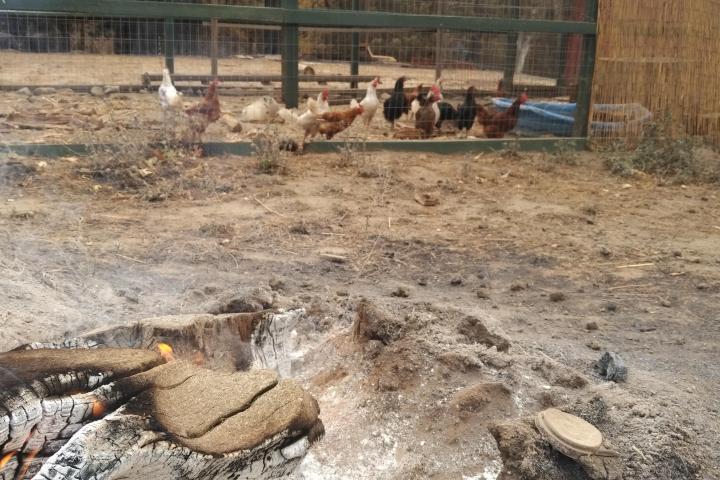 Deputies bent rules, letting a Concow man feed surviving birds during the Camp Fire
photo credit: Marc Albert/KRCB
You may know first hand how people evacuate during natural disasters; have you ever wondered what happens to livestock? A recent state law changed some rules, letting ranchers feed and water their animals, even during an evacuation. That’s opened up a series of questions concerning farm workers, health and safety.

When wildfires devastated California in 2020, scorching fields and leaving livestock abandoned to their fate, lawmakers moved to enact an agricultural pass program. According to Kirk Wilbur, director of governmental affairs at the California Cattlemen’s Association, the law was intended to let ranchers care for surviving animals more quickly in emergencies.
“As a rancher tried to access their ranch to safeguard livestock…evacuating those livestock in the worst case scenarios, they were finding that they were often having trouble accessing their ranch because they were discussing access with folks who were unfamiliar with the individual rancher, unfamiliar with the community,” Wilbur said.
Lawmakers also included protections that limit who may enter evacuation zones. Under the law, only managerial employees, as well as certified livestock producers, are allowed access to their farms, and thus be exposed to hazardous conditions. According to Max Bell Alper, executive director of North Bay Jobs for Justice, these kinds of protections were originally meant to encompass workers from all agricultural industries.
“Originally, as AB 1103 was written, it included all agricultural workers, not just livestock workers…A lot of it was changed in the process of making the law because of lobbying by big agriculture and large wine industry, so that it does not include most workers who work in vineyards and agriculture,” he said.
Now, he said, the responsibility is on local governments to regulate who is allowed on farms during natural disasters.
“Because AB 1103 does not include most agricultural workers, it’s even more urgent that the County of Sonoma pass policies to protect workers here,” Bell Alper said.
The Sonoma County Board of Supervisors will meet for that precise purpose on July 19th, to discuss implementation of the law in the county and receive public input.