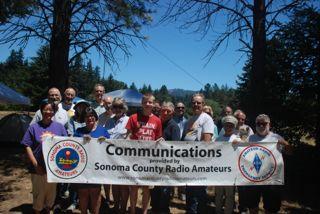 When all else fails, there's still ham radio.

Amateur radio, often called "ham radio," has taken on new significance with all the recent wildfires and other emergencies in Sonoma County. It's also a time-honored hobby whose enthusiast are holding its biggest event of the year this weekend

What you're hearing is MORSE code. The message being tapped out is "Welcome to Field Day."

Indeed, the many members of the Sonoma County Radio Amateurs club want to welcome you on Saturday, June 25th at Santa Rosa's Finley Community Park .

They are joining other ham enthusiasts from across the United States and Canada for the largest annual gathering of amateur radio operators in the world.

In years past the gathering was a 24-hour long affair. But it was put on hiatus after COVID broke out. This year will be the first live gathering in two years, so the club is starting off with a more modest outing. But, there's still plenty to take in - including live demonstrations of Continuous Wave Morse code, or "C-W.”

Darryl Paule is the club's outreach coordinator. He explained, “There's the GOTA, Get On The Air station for those that are not licensed, or those that want to upgrade their license and experience high frequency radio. We'll be doing the Winlink, we'll be doing a digital mode called FT-8, we'll be doing satellite radio... So, there's going to be about six or eight different "stations," if you will, that people can see,” he said.

Winlink, which he just referred to, is a system that can send emails without an internet connection.

Paule explains, “We'll be using a 2-meter radio connected to a laptop and I'll ask  people for their email address and then I'll be able  to - via radio- send them an email message,” he said.

That definitely comes in handy when the internet is down during an emergency.

Ham radio is more than a hobby. It plays a vital role in emergency communications during and following disasters. Many club members are organized into seven geographical groups, or units, which regularly train and practice working together with Sonoma County emergency operations officials.

Dan Ethen works with the Sonoma County office of Emergency Management and coordinates club member trainings. He says, “We have a hundred and fifty trained volunteer communicators who are amateur radio operators throughout the county, and we provide backup to those systems that either become overloaded  or unusable in a time of emergency, to provide that communication between unincorporated areas and the county seat,  and also cities that are within the boundaries of  Sonoma County,” he explained.

Ethen says he has been an amateur radio enthusiast and hobbyist since age 10.

Like with any hobby, he says one can spend as little or as much as they want on a radio that can both receive and transmit over amateur radio frequencies.

He said that “a lot of the Chinese radios that are mass produced are at a price point of $30 or $40, you know, just to get started,” explained Ethen.

Prices can climb quickly into the thousands of dollars for more features and power options.

The good news is that club members are always eager to help.

Ethen said, “The club has a loaner program that covers a wide variance of hardware that you can check out and give it a test drive, without having to make that investment, and know exactly how far you want to take the hobby,” he explained.

Since the 2017 Tubbs fire, the club's membership has jumped by nearly a third, and that's even through the COVID shutdowns. Folks from age five to one hundred-five are "turning on" and "tuning in" to Amateur radio. Some as a hobby, others to support their community in times of crisis.

The club holds regular monthly meetings on the first Wednesday of each month at the Luther Burbank Art & Garden Center, located at 2050 Yulupa Avenue in Santa Rosa. You can get more information on the Sonoma County Radio Amateurs website, www.sonomacountyradioamateurs.com.

In short, the Field Day is a great place to meet members, ask questions, see live demonstrations, and even try out getting on the air yourself.