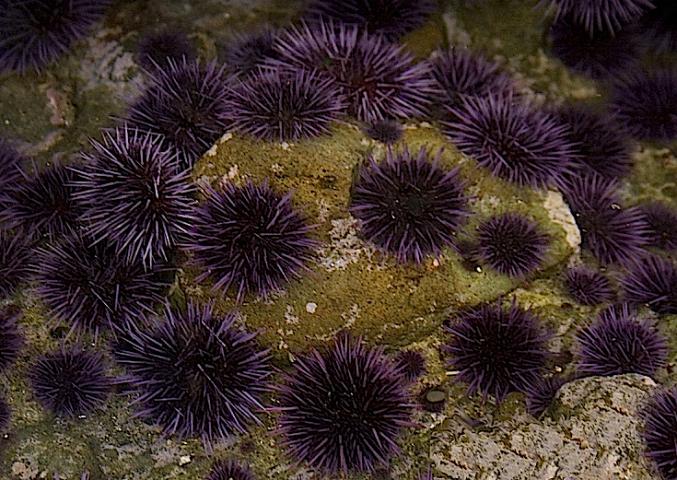 photo credit: Courtesy of Gregory Smith/Wikimedia
Uni. The rich and briny roe of sea urchins. Considered a delicacy by many, an aphrodisiac by some, and now a dangerous pest by ocean experts. These sea urchins took center stage at the Mendocino Coast Purple Urchin Festival, aimed at spreading the word on the detrimental impacts California’s kelp gobbling purple sea urchins can have, and how the public can help.
"When you go underwater, you'll see that there are no kelp forests, just miles and miles of purple urchins." Ana Flores said.
The Sonoma-Mendocino Coast was for a long time home to a dense kelp forest. It sequestered large amounts of carbon and provided a home for a diverse population of sea life.
But between 2013 and 2016 a “perfect storm” of events changed all that. A mass die-off of sea stars - a main urchin predator, and unusually warm ocean temperatures, saw populations of purple urchins explode. More than 90% of the once abundant kelp forests off the Sonoma-Mendocino Coast, simply vanished.
Hoping to check purple urchins and give the kelp a chance to bounce back, conservationists, scientists, chefs, filmmakers, and residents launched the Mendocino Coast Purple Urchin Festival.
Ana Flores, a documentarian, said it's geared towards education.
"The Urchin Fest here in Mendocino is a way to help raise awareness, but also showcase some of the solutions that people are doing to help mitigate the problem." Flores said.
The first ever Urchin Fest in the US; events included special urchin focused meals from local restaurants, presentations by the Waterman’s Alliance and Mendocino Parks Association, and a film preview by Flores and co-filmmaker Natasha Benjamin for their upcoming documentary Sequoias of the Sea.
Flores said she sees the Purple Urchin Fest as just the start of an important battle.
"There's just so much support for learning about the purple arching and what we can do to help mitigate the problem because so many fish and sea life depends on kelp, it sequesters more carbon than mangroves on land." Flores said.