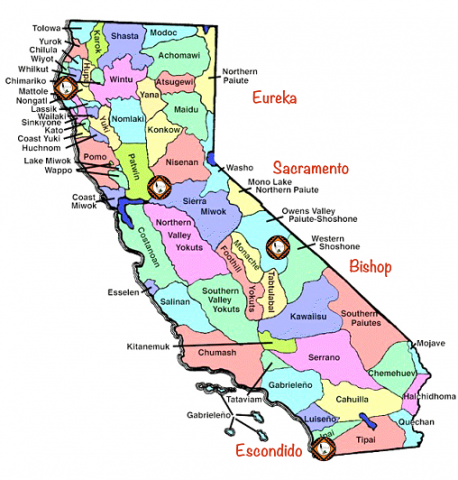 Dozens of native tribes called what became California home
photo credit: Credit: California Indian Legal Services
Before European contact, more than 300 Native American languages were spoken in North America. Fewer than half remain.
The federal Bureau of Indian Affairs Wednesday announced scores of grants to slow or reverse that trend. In some cases, all that remains of a language are old recordings and archival texts.
Marnie Atkins, a linguist and member of the Wiyot tribe of Humboldt County, one of the grant recipients, said the Wiyot plan on using their grant money to make existing recordings more accessible.
“A lot of our recordings are inaccessible, especially if you’re a new speaker. It’s as if somebody who doesn’t know French turns on, you know…A French CD and just starts listening with no context, no English.”
According Justin Spence, a professor in the Native American Studies Department at UC Davis, many Native American languages nearly disappeared since European settlers arrived, a process that continued after statehood; Native American children were often separated from their families and sent to state-run boarding schools.
"There are lots of stories of people who were punished for speaking their ancestral language in those settings, and so I think a lot of people who had that experience made what I imagine was a very difficult decision to not transmit the language to younger generations,” he said.
For Atkins, the Wiyot language Soulatluk is essential to her identity.
“I want to be able to talk to other people, because I think it ties me to my homelands, it ties me to my ancestors, and it ties me to who I am in the world,” she said.
The Wiyot, who received a grant of almost $200,000, were one of 45 tribes to receive funding this year. And although there are no more living people fluent in the Wiyot language, Atkins emphasizes that Soulatluk, as well as other Native American languages, should not be called dead.
“A language is not dead if you have resources and people who wish to relearn it,” she said.