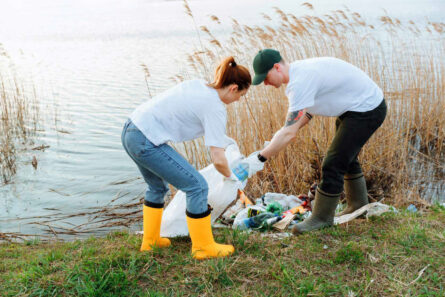 photo credit: Credit: Leave No Trace
Disposable masks, takeout containers, Amazon boxes; the pandemic has caused a dramatic uptick in trash. Local officials are upping the game on cleaning it up.
Last year, more than thirty-eight thousand pounds of trash were collected in Sonoma County on Coastal Cleanup Day alone, with eighty-five thousand pounds picked up annually statewide. Sonoma, Marin, and Mendocino Counties are collaborating with the nonprofit Leave No Trace in an effort to mitigate littering and promote environmental stewardship.
Kelly Bass Seibel, with Sonoma County Tourism, said the new initiative is focused primarily on the coastal areas of all three counties. She hopes consistent messaging about environmental stewardship comes out of the partnership.
“For us, what that means is we know visitors don’t differentiate necessarily — if they’re standing on a beach in Mendocino County, Marin County, or Sonoma County. But if they’re seeing, if they’re driving up highway one, and they’re stopping, and they’re seeing the same message consistently, then there’s a much more…likelihood that that messaging is going to stick, and that they’re going to remember those responsible travel ideas and principles,” she said.
Sonoma County has been partnering with Leave No Trace since 2021, but this is the first time all three counties will be working together. With the adoption of the program, the counties will commit to significantly reducing trash by July 2027.