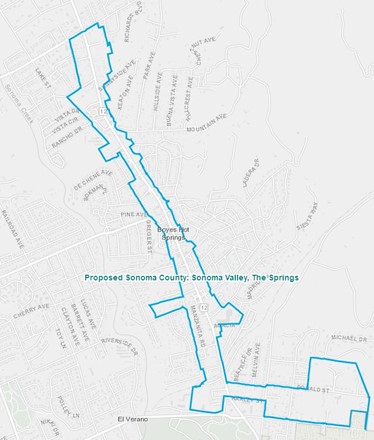 'Springs Specific Plan Area' north of Sonoma
photo credit: Credit: County of Sonoma
Neighbors are expected to offer their verdicts Thursday on a proposal to encourage more development just north of Sonoma.
Officials say they've already hosted 20 community workshops on the Springs Specific Plan. The lengthy document, if approved, would prescribe in detail the type, design and general location of new construction inside a 180-acre area straddling highway 12 north of Sonoma.
It's designed to fast track development proposals complying with the plan.
Bradley Dunn is policy manager for Permit Sonoma. He said the ultimate goal isn't to add density for density's sake, but to bolster the area's sense of place and deliver a more walkable community.
"To foster that identity by making improvements to kind of encourage additional housing, more community gathering places, better transportation, safety and connections---those kind of things."
The plan conceives up to 706 new homes, 120 hotel rooms and 276,000 square feet of retail, office and other commercial space. All of that would happen over the course of years, if not decades as structures are built one by one, not all at once by a single developer.
Dunn said intensive community engagement has brought many neighbors aboard. That contrasts with another major project less than three miles up the road: redevelopment of the Sonoma Developmental Center.
"This process has been less contentious, than SDC. I would not expect an SDC meeting."
The Draft Environmental Impact Report--public review of which is the subject of Thursday's meeting, outlines the potential drawbacks of the plan, and lists ways to soften the downsides.
Although they're in proximity, impacts on traffic of the two plans are being considered in isolation of each other, something that may not sit well with some in Sonoma Valley.
"The Springs process started long before the SDC process. This has been kind of on-going and this is the way projects are analyzed, under CEQA," Dunn said, referring to the California Environmental Quality Act.
The on-line hearing, before the Sonoma County Planning Commission is scheduled to get underway Thursday at 1p.m. A link can be found on the county's website, or by clicking https://sonomacounty.zoom.us/j/97415887706?pwd=dmgrNm9JWEE3UjFKVVJaTzl1bnBTZz09