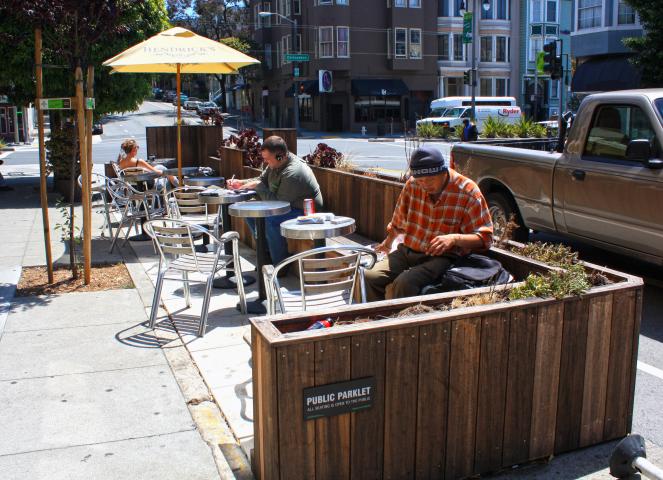 photo credit: Courtesy Flickr/SF Planning Department
Of the many changes to how people navigate urban landscapes because of COVID, one in particular has proven quite popular: parklets. The small parking space - roadway enclaves, sometimes built for public use, but often used by restaurants as outdoor dining spaces, were quickly permitted by many cities early in the pandemic to help restaurants retain customers. It turns out, they've proved tricky to regulate.
Santa Rosa, like many cities with lots of active parklets, has developed and enacted a new set of official rules.
Gabe Osburn with Santa Rosa’s Engineering Department said changes to the rules are limited, and flexibility will allow needed street work to proceed.
"The manual will actually supplement the code and it dives into some of the details that are very unique to parklets and addresses those." Osburn said. "We're proposing to issue those permits for one year with annual renewals and we are not restricting the number of renewals. The reason we have it on a one year cycle is because the universe around a parklet and the public right of way can change."
Osburn said the new rules aim to assure public safety, allowing them only on low speed, low traffic streets.
"We're only proposing to allow parklets on a street with a speed limit of 25 miles per less, and a trip volume of less than 5,000 vehicles a day." Osburn said. "We're proposing to create a separation from intersections of 15 feet. So that would be 15 feet from any street corner, intersection or active driveway."
Losing parking is often a major concern for retailers, but Osburn said permanent parklets under the new rules won't disrupt downtown parking.
"If we look at the downtown and the railroad square area, there is surplus parking." Osburn said. "So when we look at a limited number of parklets, there isn't potentially an impact on the parking revenue."
As covid continues to stick with us, so too will Santa Rosa’s parklets.