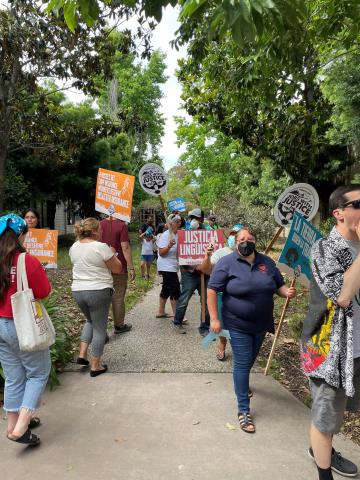 photo credit: Courtesy Noah Abrams/KRCB
Farmworkers, activists and supporters showed up at Sonoma County government offices last week, calling for worker protections.The protestors rallied outside Sonoma County’s Office of Emergency Management Thursday afternoon, June 9th, demanding to be included in negotiations over the direction of the county's Ag Pass program.
The Ag Pass program provides a framework for farm and vineyard owners, and their employees, to enter mandatory evacuation zones to perform, often time-sensitive agricultural work.
With wildfire season already underway, the protesting workers attempted to speak with county officials to deliver their demands, but found the office doors locked.
North Bay Jobs with Justice Executive Director Max Bell Alper said workers have been trying to offer ideas for increased safety.
"And we've been unable to talk with the department of emergency management." Bell Alper said. "And so today workers and community members showed up to offer the workers proposals on a policy to make sure that farm workers are safe and protected this year."
With translation from Bell Alper, Anabel Garcia, one of the worker-organizers with Jobs with Justice, said ag workers have suffered from repeated wildfires and wish to be seen and heard, but have received little attention.
"They need to see us not as robots, but as people, we're the hand of work in all parts of this county." Garcia said. "In my experience, when the fires happen, none of the winery owners called to see how we are doing."
Garcia said the county government should listen to the concerns of the Latino community on working safety during wildfires.
"As Latinos, we have been hit the hardest in the fires in 2017, and then again in 2019 and 2020, and we still don't have an answer." Garcia said. "We need the government to be able to listen to us and to create a real policy that follows the workers because as workers we've suffered a lot in natural disasters."
During natural disasters like wildfires, evacuation orders are enforced by the county sheriff’s office. Carl Tennenbaum, the second place vote getter in the still-undecided sheriff’s race, said, should he make it to a runoff and win the Sheriff-Coroner position in November, his office would be there for the entire Sonoma County community.
"To have an open door and open dialogue with the farm workers, and also with the business owners too, to make sure that everybody's on the same page to ensure that public safety, which is a cornerstone of being the sheriff, public safety is served for all of our residents." Tennenbaum said. "All of our workers, all of our visitors in Sonoma County."
Tennenbaum said he thinks a clear county policy on work in evacuation zones is necessary.
"One of the big topical issues we have is evacuations during natural disasters, whether it's a flood or a fire." Tennenbaum said. And the fact that these workers who are being paid next to nothing with very few benefits are forced to go back and work in the vineyards or work in the fields during, you know, we've got fires raging. And I just think that if either they need to be compensated and taken care of in a health aspect of it, or they need to be evacuated like everybody else."
Kathryn Howell, president of the Santa Rosa Teachers Association, said she and other members of the Teachers Association attended Thursday's rally to support their students.
"Farm workers family’s are the families of the students in our schools." Howell said. "And we need to support our students in every way. And that includes the well being of their families and the safety of their families while they're at work. It's super important to the teachers to make sure that the students have the security of their family and the families have the security of a secure job place."
As grass fires continue to pop up around the county and early summer temperatures continue to spike, calls for fair ag worker safety, representation, and compensation in Sonoma County continue.