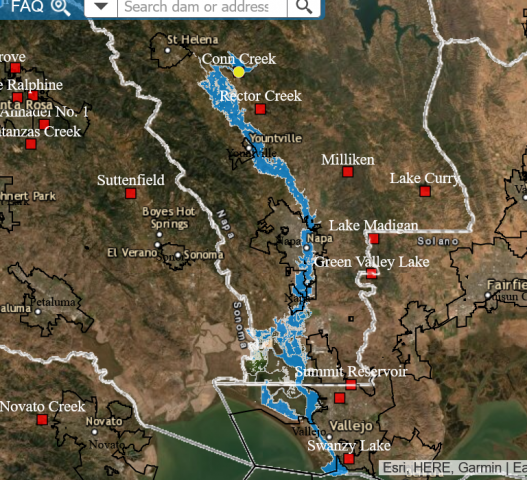 Computer model showing areas submerged if Lake Hennessey's aging spillway failed.
photo credit: California Department of Water Resources
Dozens of local water-related projects moved a step closer to reality late last week, as the House of Representatives approved a nation-wide bill to upgrade water infrastructure.
Much of the local initiatives that made the cut involve dredging and using spoils to shore up areas against sea level rise and to protect, restore and create wetlands, including in Petaluma.
The Water Resources Development Act of 2022 also authorizes a study to reduce potential flood damage from a catastrophic spillway failure at Lake Hennessey. The 76-year-old earthen dam is rated as in 'fair' condition, though it's considered a 'high hazard' because its failure would inundate heavily populated areas, likely costing lives.
Deteriorating water and sewage pipelines within Santa Rosa were are also included. Without repair, failure is expected within two years, according to North Bay Representative Mike Thompson, who, along with colleague Jared Huffman, voted for the bill.
"Everybody knows we need good sewer systems. Decades of use of the Santa Rosa facility has left us in a situation where we really need to do those repairs. In regard to Lake Hennessey, it is important that it's structurally sound, and that's what these monies will do," Thompson said..
Huffman was able to include a feasibility study of adding floating solar panels to reservoirs managed by the US Army Corps of Engineers. Funding was also secured to deliver recycled wastewater to Healdsburg parks, schools and cemeteries for irrigation, preserving about 40 million gallons of drinking water. A plan to temporarily store water in aquifers near Healdsburg was also included. Water would be injected deep underground, and pumped back to the surface during droughts.
The bill has been awaiting consideration by the full senate after advancing out of committee more than a month ago. The Congressional Budget Office has yet to release a cost estimate. Similar bills are generally approved every two years.