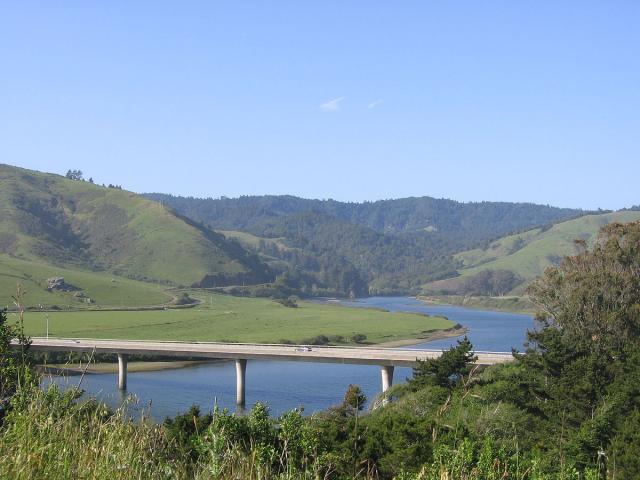 photo credit: Courtesy Wikimedia Commons/Lanthanum57
Drought vulnerable Healdsburg is willing to consider signing on to a new state initiative that's looking to have parties equitably share water, rather than settling disputes in court. As far fetched as that sounds, the State Water Resources Control Board is fine tuning their Russian River 'voluntary water sharing program' at a meeting today. Healdsburg took up the issue Monday.
With water running scarce and no end in sight for California's drought, state officials are exploring a new tack; negotiating a cease fire of sorts in the endless battles over water. The goal? Create a program for water sharing amongst rights holders when the state issues curtailments and cuts water access for some.
California operates on a first come, first served basis. That means entities pulling water from a stream for example since 1914 or before are first in line. Everyone else, comes next. In drought, it's usually those everyone else's that suffer.
That system has left Healdsburg vulnerable. Terry Crowley, Healdsburg’s Utility Director, said the city lies right on the cusp of water rights holders vulnerable to curtailments.
"Healdsburg's water rights range from 1949 to 1957 and fall in the middle of the grouping of water rights." Crowley said. "So we're not really a junior, right? And we're not a really senior, right. But we're just kind of in the middle of the road. And, and we tend to always fall right on the cut line of curtailments."
Crowley said the proposal would bring more equity.
"The intent agreement is to share the available water in a, in a more sophisticated or more communal manner." Crowley said. "Currently the, the state board restricts water based on your water right priority. And so there's not enough water rights for water rights issued after 1970, nobody gets any water after 1970."
With the council's unanimous approval, Healdsburg is now awaiting final details on the plan from the water resources board.