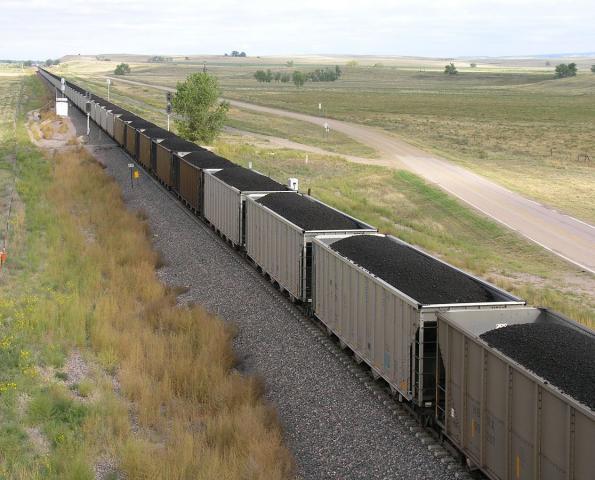 photo credit: Courtesy Wikimedia Commons
*Editor's note - Since the airing of this story, the North Coast Railroad Company submitted to the Surface Transportation Board a late application of intent to purchase 175 miles of rail line on the dormant rail line under the authority of the North Coast Rail Authority/Great Redwood Trail Agency. KRCB will continue to cover this and any developments on the future of the Great Redwood Trail and potential coal freight operations.
A North Bay politician says plans to ship coal on long-dormant freight rail lines running along the North Coast appear to have failed.
State Senator Mike McGuire's district represents the North Coast from the Golden Gate Bridge to the Oregon border. He held a virtual town hall Wednesday to talk about what's next for a plan to revive the abandoned North Coast Railroad.
Dubbed the quote “Toxic Coal Train," opaque coal interests had been exploring resuming operations on the line.
"The Surface Transportation Board had a deadline for any interested party to submit an offer for the rail line." McGuire said. "And big coal was scared off. Those Utah and Montana coal companies, they never submitted an application."
McGuire said attempts to ship coal along the rail line, which trains have not run on for 20 years, fell through due to issues with viability and large public push back.
"To be able to make it work financially." McGuire said. "This operation would have to run 16 trains every day, 100 cars long from Utah, where they sourced the coal to Humboldt county, right through nearly every city in Sonoma, Mendocino, Humboldt and Marin counties, the North Coast organized to be able to derail any plans for a toxic coal train to get started in our backyard."
The plans threatened the proposed Great Redwood Trail, a recreational hiking path along the existing rail corridors and rights of way of the former North Coast Railroad Authority, now the Great Redwood Trail Agency. The 320-mile trail would go from the Golden Gate Bridge to Humboldt Bay, passing the Russian and Eel Rivers and Humboldt Redwoods State Park.
With the attempt by outside coal financiers to commandeer the line apparently defeated, McGuire told town hall attendees construction of the trail can now proceed, and funding is secured.
"We have the money in the bank to move the Great Redwood Trail forward." McGuire said. "10.5 million is in the bank to pay for upping the staffing for the Great Redwood Trail agency."