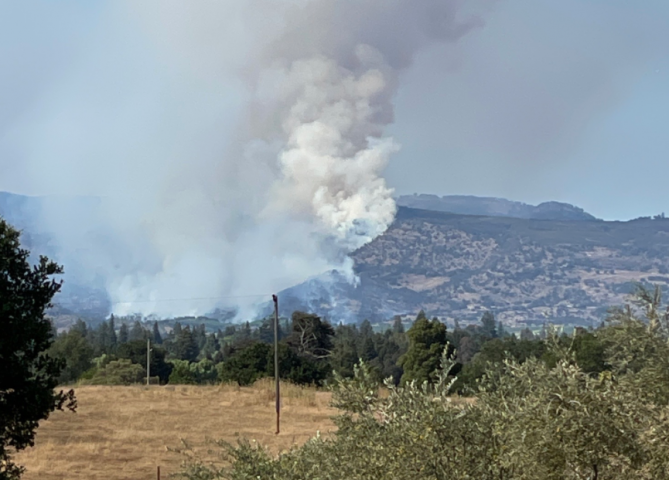 The Old Fire erupted in a field around 4 pm, this is a view from Foster Road.
photo credit: Courtesy of an anonymous poster to Watch Duty.
June 1, 2022 8 a.m. update: This morning CalFire's Sonoma-Lake-Napa Unit says crews made good progress overnight, and have held the fire at the nearly 600 acres burned Tuesday between 4 p.m. and 10 p.m. The 'Old Fire' is now considered 15% contained. Around 11 p.m. Tuesday night, authorities allowed access to residents in a soft opening of all evacuation areas. CalFire also said in a tweet early Wednesday the unit will have "a full 24-hour shift staffed with many resources for today's fire fight."
10 p.m. update: According to the nonprofit fire information service Watch Duty, as of late Tuesday night, fire crews are "starting to release some aircraft. Tankers did a good job of fencing in the fire. Still lots of heat in the interior of the fire. Ground crews will be working on hot spots and containment lines through the night. Final post for the evening, unless we are updated by CalFire or conditions change dramatically."
Initial story posted May 31, 2022
There's a wildfire burning as of late Tuesday afternoon in Napa County, and it has prompted sheriff's deputies to go door-to-door ordering evacuations. Named the "Old Fire," it has burned an estimated 570 acres since 4 pm and started near 2100 Old Soda Spring Road in Napa County.

The latest report is it's holding to the west at Old Soda Springs Road and east to Soda Canyon Road. The fire is burning to the north with a slow to moderate rate of speed. That's according to information from Watch Duty.

An evacuation center has opened at Crosswalk Community Church at 2590 First Street in Napa. There evacuees can find food, water and charging stations.

Firefighting aircraft are above the fire, as crews battle from several sides. It's 5% contained as of 10 p.m.

This is a developing story and we will keep updating this article as more information becomes available.