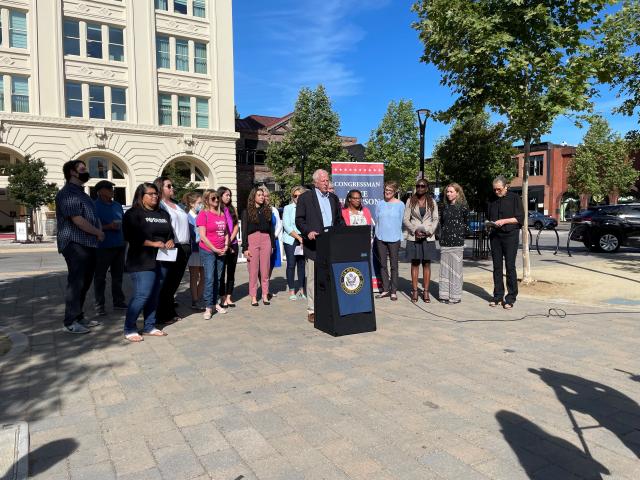 photo credit: Courtesy Noah Abrams/KRCB
Local elected officials, civil leaders, and student representatives gathered for a press conference on reproductive freedoms in Santa Rosa this morning. As the fallout from the leaked draft Supreme Court decision on Roe v Wade continues, local leaders are affirming their support for abortion rights and reproductive freedoms.
Anger and resolve characterized the morning’s speeches. North Bay Congressman Mike Thompson, who represents Santa Rosa and parts of eastern Sonoma County organized the event.
"And we're here because we all believe that a woman has the right to make decisions about her reproductive health. And the idea that the United States Supreme court is poised to reverse nearly 50 years of law to take the right away from women to control their reproductive health, we find appalling." Thompson said.
Rohnert Park Mayor Jackie Elward said she is exhausted from the continued battle over women’s right to choose, and fearful for the impact on members of the black community.
"As a black woman, I am tired to even be here and talk about my womb. When men out there don't have to, they are free and to do whatever they want with their bodies. My people will be the first one to endure the despicable actions that they will be taking." Elward said.
Michaela Schillinger, a student leader from Sonoma County spoke as well.
"As a young woman. I am in a lot of fear, always about having rights to my own body. And the fact that we're taking such a huge step back is incredibly upsetting." Schillinger said.
Mariana Martinez, a professor and Santa Rosa Junior College Trustee, said as recently as 1970, Latina women’s bodies were the site of struggle.
"Before then. Our bodies were still not ours. We were sterilized; and today we're actually reprimanded because our bodies are still not ours in the sense that we don't have money for education. We don't have money for healthcare access." Martinez said.