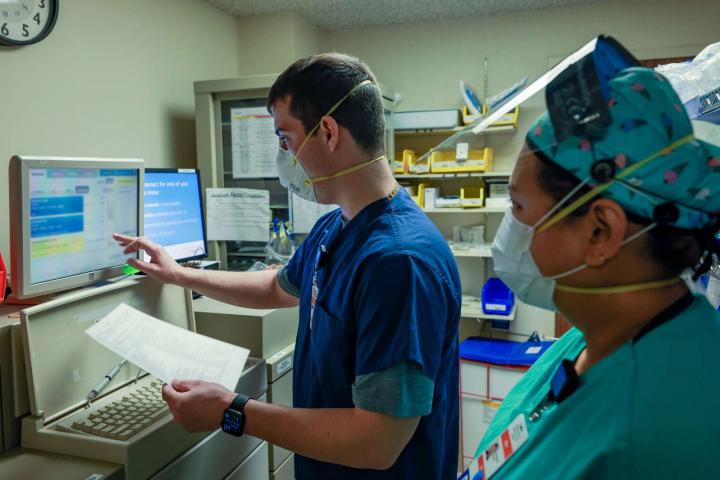 photo credit: Courtesy NARA&DVIDS Public Domain Archive
You may have noticed nurses picketing recently in front of Petaluma Valley Hospital. In March of 2021, Petaluma Valley Hospital nurses signed a new labor contract following nearly three years of protracted negotiations.
Jim Goerlich is president of Petaluma Nurse Staff Partnership, the independent union representing nurses at the hospital. He said despite inclusion in the contract and after months of closed door negotiations, issues remain unresolved, including…
"How dialysis is delivered in the hospital. And we had an issue with how the hospital was accessing and utilizing our paid time off accounts during COVID and also how often they were canceling our shifts during COVID." Goerlich said.
Goerlich said another main concern is the failure to adjust scheduling needs after the hospital switched to a new scheduling system.
"The hospital changed their computer system to different and in a lot of ways, a better system, but that system doesn't capture what the patients need. And so we're really trying to get that because staffing is an ongoing issue day in and day out." Goerlich said.
According to Goerlich, the hospital has actively worked to address nurses’ concerns about dialysis procedures, but...
"The major sticking points is that the hospital's refusing to put what they agreed to into written language, which is actually a part of our contract."
Goerlich is hopeful the issues will be resolved without a strike.
"Going out on strike is something that we just, you never want to do it, right? What we've found in the past that is helpful is just shedding light on the issues." Goerlich said.
In a written statement, a spokesperson for Petaluma Valley Hospital said the dialysis changes are in line with the agreed contract and the changes made do not require bargaining. They also said the hospital has complied with state law regarding Covid sick leave and paid time off, and that the nurses have not submitted a list of individuals they claim to be affected by PTO use. But admin said its committed to "reviewing and responding appropriately".