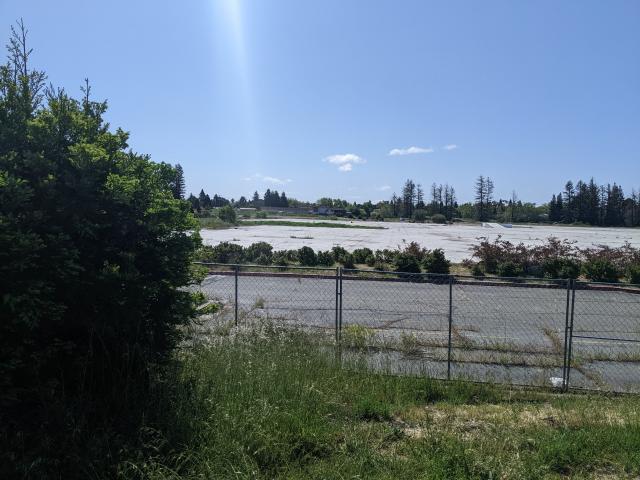 Former State Farm insurance campus, Rohnert Park
photo credit: Marc Albert/KRCB
Plans for a formal downtown to rise on the abandoned State Farm site received a strong but informal vote-of-confidence this week from Rohnert Park's city council.
Agreeing conceptually with an approach advanced by city manager Darrin Jenkins, the council agreed to fast-track the project, aim for about four hundred sixty housing units and focus on alluring amenities. That's while acknowledging that independent retailers and eateries demanded by the community, may require subsidies.
Councilman Gerard Giudice said the development can help address another issue.
"If you are a young person and you just graduated from college and you're just starting your career, you can't afford to live in Sonoma County, you can't afford to find housing. Conversely, once we get older, and we retire, it's very difficult to retire with dignity and still have affordable housing here in Rohnert Park, so we're separating the grandchildren from the grandparents, and that's terribly wrong."
More housing would require a parking garage, officials say, something that would alter the feel, and upend financial plans.
Rohnert Park resident Jenny Benson Miller urged the council not expand housing further.
"The people voted to have a downtown, not just units. Don't make it a place where it just ends up more units and more housing. Make it a place where people can come and enjoy, they can eat, they can shop, maybe music, things where it brings people together."
Several speakers, including neighbor Paula Molenar, said noise from SMART has ruined her quality of life and fears additional development will make things worse.
"We cannot afford physically or financially to just pick up and move. I would like to get out of there because of this noise, but I can't do it. We really do need a sound wall, I know you all are planning, there's probably going to be concerts and bands. There's a parking lot behind us which is SMART's lot, that's going to be full and that's going to bring noise, possible crime, the drinking, I worry about the brewpub and things like that," she said.