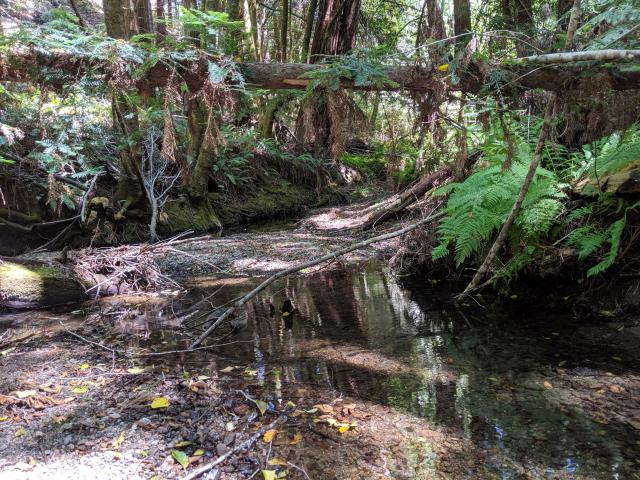 Depleting groundwater aquifers can make surface streams vanish
photo credit: Marc Albert/KRCB
A year-old lawsuit about how Sonoma County manages the Russian River could make some waves Tuesday.
County supervisors met behind closed doors to discuss the case, which seeks judicial intervention in the county's management of the Russian River watershed.
Brought by environmental group California Coastkeeper Alliance, the suit accuses the county of approving groundwater wells near the river, without adequately studying impacts to river volume and flow.
Although much of California water law distinguishes between water in a river, stream or lake--so called 'surface water' from water buried beneath the earth--groundwater, the two are connected.
In its filing, Coastkeeper accuses the county of issuing more than 400 well permits in the river's vicinity between September 2018 and August 2020. Those approvals came without studying any river impacts, according to the suit.
The group argues that the river, its fish and habitat belong to everyone in California, and that the county's actions degrade those assets.
In addition to the discussion by supervisors, a meeting between the parties was scheduled for Tuesday at 3pm before Judge Patrick Broderick in Sonoma County Superior Court.