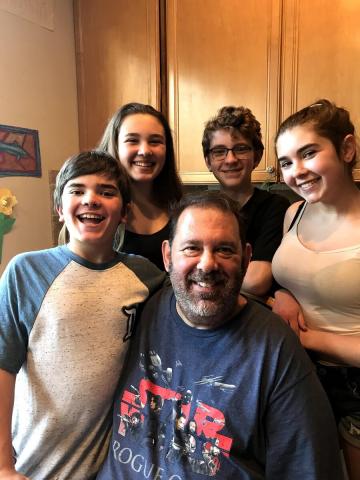 photo credit: Courtesy Brad Coscarelli
Sonoma County will elect a new superintendent of schools next month. Three candidates are hoping to replace the retiring Steve Harrington. They are: Brad Coscarelli, Amie Carter and Ron Meza Calloway. As part of our ongoing June 7th primary election coverage KRCB gets to know the candidates, next up: Brad Coscarelli.
"I went into teaching to make a difference. I love kids. I love teaching. And it's the same reason that I left the classroom to go into administration." Coscarelli said.
With 30 years of educational experience, 22 of which have been spent in Sonoma County, Brad Coscarelli has helped to shape a generation of Sonoma County’s students.
Coscarelli was born, raised, and first taught in the South Bay before getting his start in Sonoma County; teaching shop class at Slater Middle School in Santa Rosa. An experience he said pushed him towards administration as a way to help more students.
"You know, a lot of my students excelled in my class. And yet when I'd talk to their teachers, they'd be failing. Maybe they'd be behavior problems. That really was the impetus." Coscarelli said.
Coscarelli was an administrator for 15 years at Santa Rosa High School, serving as principal for the last eight of them.
He is now the principal of Hidden Valley Elementary in Santa Rosa. Coscarelli took over the role following the 2017 Tubbs Fire, assuming leadership of the school where each of his four children had attended.
"Well, they were in bad shape. They had been hit the hardest by the Tubbs. They lost a whole campus. The little one that was up on the Keysight campus called the Satellite, and all my four kids had gone through the Satellite." Coscarelli said. "Even to this day it's an empty lot."
Coscarelli recognizes the myriad of challenges facing Sonoma County’s schools, many of which go beyond unforeseen disasters like wildfires and Covid, and said that motivates his run for superintendent of schools.
"I see a lot of issues in public education. I see a lot of things that need to change drastically. I want to make that happen." Coscarelli said.
One of the major issues he hopes to deal with as superintendent is funding. Coscarelli acknowledged the issue of declining enrollment across the county, but he sees improving school’s funding as one way to, as he said, “pull families into Sonoma County.”
One of the funding issues he hopes to target is a serious gap between where spending per student is currently and where it should be.
"Our per pupil funding is somewhere around the 36th in the nation. That's embarrassing. Our spending for our students should be top 10, top five. If not number one, I would fight at the state level and at the national level to make sure that we get the funding that our students need and deserve." Coscarelli said.
Another is the issue of recruitment and retention. Coscarelli said Sonoma County’s schools must do better in providing competitive wages, acknowledging that $15 per hour simply isn’t enough. But he sees great opportunity for retention for Sonoma County schools by growing from within.
"We have an amazing junior college. We have an amazing Sonoma State and we already have in existence, a credential program for teachers and administrators, at SCOE." Coscarelli said.
Coscarelli also said as superintendent of schools he would push districts to use available funds to improve schools, instead of simply saving for savings sake.
"You have students that need support right now that maybe can't read or teachers that aren't getting competitive wages. You're losing teachers, you're paying school employees, minimum wage. Why do you have such a high reserve?"
He said that while some administrators fail to engage with students and staff, he would bring student centered leadership to Sonoma County’s Office of Education. Coscarelli pointed to his time as principal at Santa Rosa High as an example of the type of leadership he hopes to bring.
"Anytime that we had major decisions to make, I included all stakeholder groups, our EL families and students, students from student government. I would go to the teachers, I'd go to the classified employees." Coscarelli said. "I'd go to all these different groups."
And he said he has tried to make himself a responsive and accessible school leader.
"My students were very vocal at Santa Rosa high. They always felt comfortable. They would come right up to me." Coscarelli said.
When asked about Covid policy, Coscarelli praised the response from outgoing superintendent Steve Harrington and the Office of Education, and said he would continue with the example set forth, and follow state guidelines. But he said his biggest takeaway from Covid has been seeing the disparity in equitable access to education Covid restrictions exposed.
"We really saw the have, and the have nots. We saw parents that had the means to get any thing that they needed for their child for Covid. Then we had other families that did not have the means." Coscarelli said. "If anything were to happen like this again, we need to have the ability to set up different stations at schools so that it's very easy to access for our families."
Coscarelli has the endorsement of a number of prominent groups including the California Teachers Association; the Healdsburg, Rohnert Park, Santa Rosa, Petaluma, and West Sonoma County Teachers Associations; the Democratic and Green Parties of Sonoma County, the North Bay Labor Council; and the local Teamsters union.
Coscarelli said he hopes being elected superintendent of schools will see him one step closer to his dream.
"My dream would be to have somebody come up to me and ask me where I'm from. And I say, Sonoma County. And they say, oh my God, I've heard they have the best schools." Coscarelli said.
Find more local election coverage and candidate profiles at krcb.org.