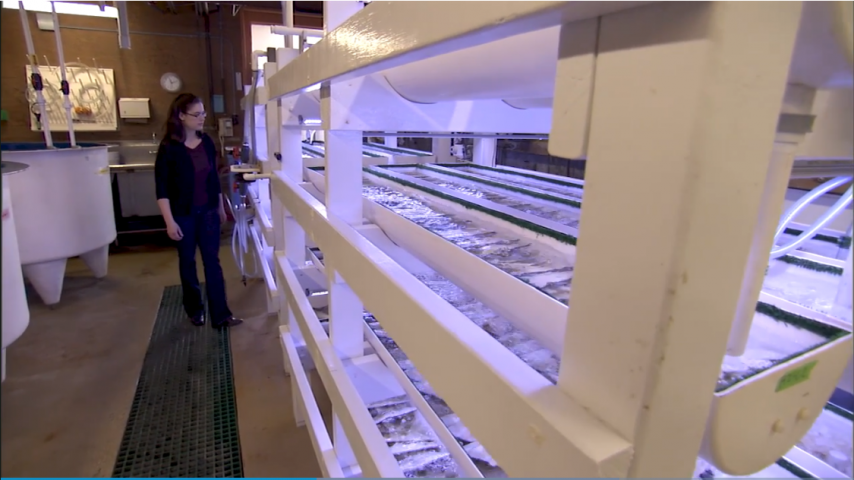 Kristin Aquilino, leads the abalone breeding program at the Bodega Bay Marine Lab.
photo credit: Courtesy NOAA/National Marine Fisheries Service
Once a coastal staple, abalone have become about as rare as a hen's tooth. That could eventually change.
Federal scientists are recommending state officials accept close to a million dollars to turn the tide for two dwindling abalone species.
Scientists want to narrow down what's caused the crash in black abalone and ramp up captive breeding of white abalone. Both are endangered.
Michael Milstein, with NOAA Fisheries, says scientists need to better understand challenges facing black abalone. There's a wasting disease similar to one that walloped west coast starfish or seastars, along with warming ocean waters shifting their range north. Post-megafire erosion is also silting up the near-shore waters abalone call home.
"Bodega bay has done some great work in figuring out how to get them to re-produce, and that has actually supported the re-introduction of some white abalone back into the wild where we're now seeing their numbers gradually begin to increase. Right now, it looks very promising," he said.
In the quarter century since fishing for white abalone was prohibited, populations have continued crashing, nosediving another eighty percent. Scientists believe their method of reproduction---releasing eggs and sperm into the ocean, isn't successful because whatever abalone that remain are simply too far from one another for 'broadcast spawning' to work.
Some of the mating secrets of the elusive sea-snails have been unlocked by scientists here in Sonoma County at UC Davis' Bodega Marine Laboratory. Much of the recommended funding would flow there, to step up efforts, Milstein says.
"We have to understand what's happened to their habitat in terms of the wildfire and landslide impacts. Are there places that we don't want to return them to at this point. We want to know is climate and the changes that we've seen, affecting both their numbers and their range," he said.