Are we depleting our groundwater? High tech underground scan should provide clearer answer 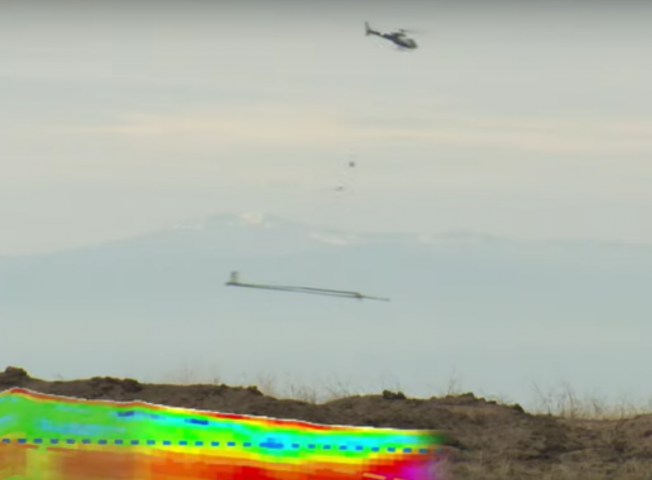 Mining tech adopted to find water deep underground
photo credit: California Department of Water Resources
It's easy to tell how much water is in a reservoir. Just take a look. But in California, where water in rivers, lakes and reservoirs supply only about two-thirds the state's water needs in a wet year, knowing how much remains in aquifers below ground--where it can't be seen---is critical.
For an accurate picture of the bounty below ground, or lack thereof, federal and state agencies are employing technology typically used in mining to find a different kind of precious resource: water.
The technology, called airborne electromagnetic surveys, works kind of like radar, with electronic pings bouncing back from as much as 600 feet underground.
As Steven Springhorn, supervising engineering geologist with the California Department of Water Resources explained, a contraption held aloft by helicopter beams signals below the surface.
"Based on the different sands, gravels and clays that are down in the subsurface, it sends an electric signal back and we're able to image, a continuous image of the subsurface as we fly along."
Knowing how much, or how little, water remains underground is key to informed decision making, Springhorn said.
"That's important because groundwater is used for a lot in Sonoma County and other areas of the state."
If you happened to spy a helicopter towing a strange object about a hundred feet off the ground last year, you likely witnessed a survey. Springhorn said the data isn't entirely comprehensive, but can be of tremendous help.
"It doesn't give you the complete answer, but it gives you a piece of the answer, where other information, local data is then compared to the AEM data to complete the picture."
Officials completed taking images in November. They're now busy analyzing and compiling data for a report expected next year.
The passage of California's Sustainable Groundwater Management Act seven years ago, made the effort a major priority, Springhorn says.
"That's where we're able to fund this new technology and bring it here to California to get better information about our groundwater basins."