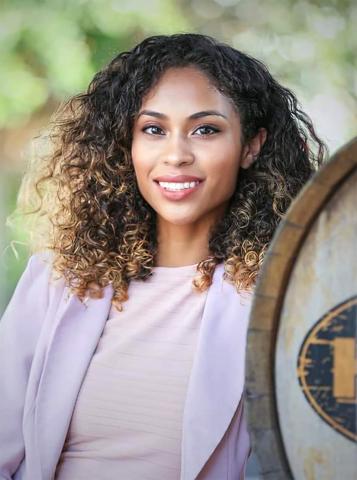 Skylaer Palacios resigned her seat on the Healdsburg City Council on May 2.
photo credit: City of Healdsburg via Bay City News
A Healdsburg City Council member abruptly resigned Monday, citing "housing instability" and "hostile treatment" in her resignation letter.
Skylaer Palacios announced her resignation from the council at the end of the body's Monday night meeting, roughly 18 months after being elected to the seat.
In addition to the housing instability that she said spurred her campaign, Palacios said her personal mail had been opened, her car had been tampered with and she had been harassed online.
Palacios also said the recent death of former Healdsburg Police Chief Kevin Burke, who was found dead in his home last month of an apparent suicide, made her reconsider whether she could remain in a healthy environment while also remaining on the council.
"When I put it in perspective, I could either continue in my position knowing that my basic needs of housing and safety may not be met, or I can choose to advocate for myself and focus on meeting these needs," she said in her resignation letter.
Palacios was elected to the council in 2020 at age 25 and was the only Black member of the council in a city with roughly 80 percent of residents identifying as white, according to 2019 population estimates from the U.S. Census Bureau.
Tension grew last fall between Palacios and the council's other four members after the council returned to in-person meetings with a requirement that those attending in person be fully vaccinated against COVID-19.
Palacios was the only member of the council to participate in meetings virtually at that time after revealing that she was not vaccinated.
She subsequently argued that her exclusion from in-person meetings was akin to the racial segregation codified by Jim Crow laws in the southern United States in the late 19th and 20th centuries.
"We cannot have certain options for engagement for certain members of the public and not for others," Palacios said at that time. "These policies can replicate the Jim Crow-era laws of separate but equal. Let us learn from the past and move forward justly."
On Monday, the other four council members lauded Palacios for her service on the council and said they understood why she chose to step down even if they were disappointed by her doing so.
"Those of us that are up here, that have campaigned -- you do feel the weight of the public," Councilman David Hagele said. "So I feel that and I appreciate that this wasn't something that you just woke up this morning and said 'this is what I'm going to do,' I'm sure this is something that you've been thinking about for quite some time."
Hagele also acknowledged that Palacios "earned" her seat on the council after campaigning during the throes of the COVID-19 pandemic.
"I have a lot of respect for you for that and you should be very proud of sitting up here," he said. "It's a privilege and an honor to represent our community and you earned that."
Mayor Osvaldo Jimenez, the only other person of color on the council, noted that being a young woman of color on the council was a "unique experience," and argued the city will be at a loss going forward without her.
"The work will continue on and we'll work with city staff to keep envisioning a better Healdsburg for all," he said. "I appreciate your voice on this council, you will be missed."
The council plans to determine in the coming weeks how to approach the vacancy and whether to appoint someone for the remainder of Palacios' term, which runs through 2024, or hold a special election for the seat during the November 2022 election.
Palacios called it a "tremendous honor" to have been elected at all and said it had been a pleasure working with the other council members.
"This has been a special moment in my life and I look forward to applying the knowledge I've gained in future endeavors, with gratitude," she said.