Conjuring a downtown for Rohnert Park 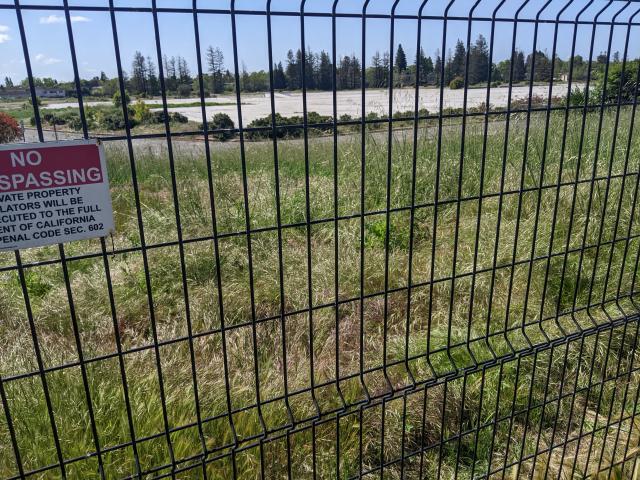 The 30-acre former State Farm site along Rohnert Park Expressway slated to become a downtown
photo credit: Marc Albert/KRCB
After a number of 'false starts,' Rohnert Park may soon receive a long-awaited downtown.
The site has potential. Plenty of it. Right now, there's not much other than a concrete slab for a building torn down long ago, a cracked, meandering road lined in spots with rosebushes gone wild. From the fence, it's a meadow of green grass, slowly curing under the strengthening spring sun.
Nevertheless, Rohnert Park City Manager Darrin Jenkins's vision remains true--the town's long sought heart and hub is taking shape, at least conceptually.
"We've had, actually, three different plans approved for this already-- that we had community meetings, we had council meetings, planning commission meetings, park and rec meetings, so we have a lot of input from the community and what they said is: they want a place where independent businesses, non-chain restaurants, they want a place to hang out, they want a nice physical amenities, not just streets and sidewalks but places to sit down, artwork, nice landscape features, outdoor lighting and event space," he said.
Some of that may be hard to deliver. Rents in new commercial developments tend to price out mom-and-pop shops and restaurants.
Nevertheless, Jenkins said, by directly owning the site, the city has a tremendous amount of leeway in delivering it's vision.
"What's great about us buying it is that we have 100 percent of the control of all the aspects of it, the look, the feel, the orientation, is it outward facing? Inward facing? and we don't have to just do what a developer wants to do, we can do what's right for the community and right for the vision, for the project, and that's the big difference of us owning it," he said.
Rohnert Park recently re-gained control of the property after previous iterations went nowhere. An earlier development agreement foundered after the sudden death of the firm's patriarch. That was coupled with demand fluctuation for office and retail space and COVID-related disruption.
After incorporating in 1962, the seed farm turned town grew into a bedroom community, lacking a center. In recent decades, that omission has been apparent.
"I raised my family here, we have great schools, we have a great sense of community---youth sports is really a huge aspect of it--but, people do comment that there's no downtown, there's no 'there,' there, and this would be an opportunity to create that," Jenkins said.
Building a city in reverse---with the downtown coming last---does flip the usual historic script. For models, Jenkins says officials look to San Jose's Santana Row, Emeryville's Bay Street, along with Windsor.
Concepts have shifted over the years.
"Initially people looked at the space as a kind of an open space, or a green space or a park along the expressway and it has evolved over the years to be more that the uses should be brought up to and closer to the expressway, that's kind of the main change, that's over the last six year period that it's sort of evolved," he said.
And, it's likely to evolve some more in the months ahead. Jenkins said he's hoping to have some decisions before the council this fall. And possibly break ground on infrastructure for the site---water and sewer lines, roads and lighting next summer.
"It does keep me up at night, but it's exciting. I'm thinking--what do we need to do next? How do we keep moving this forward, and so it really is with a sense of excitement that we are seizing a real opportunity to add to an existing, already wonderful city," he said.