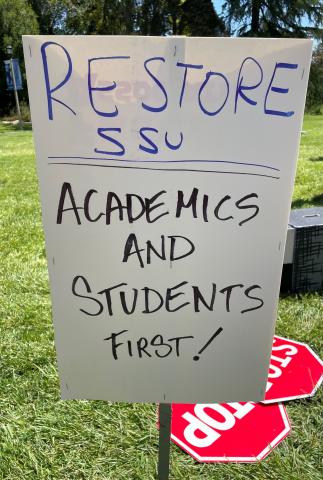 "So disappointing, so disheartening, so demoralizing."

Those are the words of Michaela Grobbel, professor of German at Sonoma State University and a senator at large, representing all faculty, in the University’s Academic Senate.

On April 13th the Press Democrat published revelations that Sonoma State had paid $600,000 to a former administrator to settle a dispute after Lisa Vollendorf, a former university Provost, claimed SSU President Judy Sakaki retaliated against her following Vollendorf’s reporting of Sakaki’s husband, Patrick McCallum, a lobbyist and fixture at campus events, for sexual harassment.

"We learned through media, not from university communication. And that was a shock." Grobbel said.

While Grobbel said news of the settlement caught staff and the campus community by surprise, she painted a larger picture of systemic dysfunction from university leadership.

"Confidence in her leadership had already started to scramble in the past few years because of the drop in enrollment and all these continuing budget crises, the high turnover that was clearly visible of administrators. And so many new administrative positions had been created." Grobbel said.

In a statement on April 14th, the university denied any retaliation by Sakaki against former Provost Vollendorf, and clarified that the initial complaints against McCallum had been found to be “without basis”, following an investigation in 2019. Still, Grobbel said the scandal has left the campus community fearful.

"This is all related to the Title IX procedures and many faculty and many students and many staff members just don't feel safe because it's clear that the reporting structure went amiss." Grobbel said.