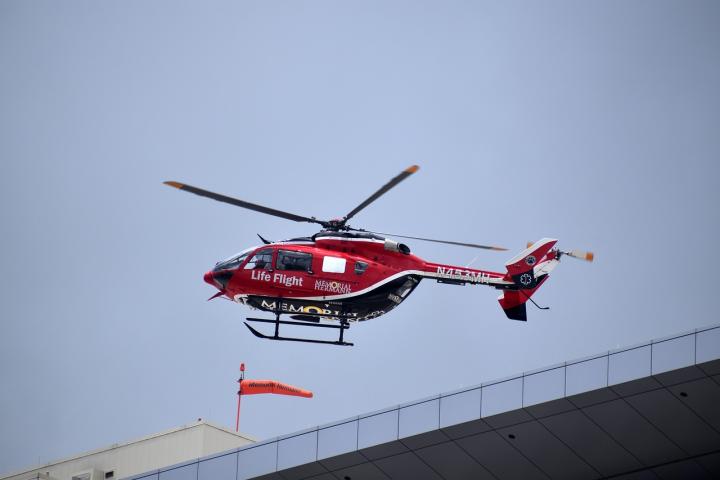 photo credit:
Residents east of downtown Santa Rosa don't expect the silence of a remote mountain village. But their patience with the thumping whoosh of helicopter blades wore thin long ago. Next week, that may start changing.
That's because a new contract between the county and what's now Providence-Santa Rosa Memorial Hospital, is set to take effect. It requires the medical center to conduct both sound and air quality studies, acceding to demands from neighbors.
Mary Pack is one of them. In her 17 years living near the facility, problems and excuses have only intensified, she said.
"There's increased noise, there's increased fumes, there's increased--there's these flights going right down our street, all we hear is 'oh, sorry, that pilot, yes, he or she went off and we educated them,' but it's not changing. It just keeps happening over and over," Pack said.
While there are three approved flight paths to the helipad, pilots answer to the Federal Aviation Administration, not local authorities.
Officials concede that only fifteen percent of helicopter flights were incoming trauma patients and that air transport to other medical facilities had increased.
Neighbors and hospital officials say the facility receives an average two round trip flights per day.
Several local residents, including Warren Schenstrom, said the choppers are filling the air with fumes.
"These lingering fuel odors can be so strong, that they cause my eyes to water and create a fuel taste in my mouth," he said.
Supervisor Chris Coursey said the community deserves responsiveness.
"They've been offered and take part in a seat at the table, they have a voice, but there's not a lot of feedback to that voice and complaints don't seem to go anywhere," he said.
Hospital officials say they are willing to compromise. Santa Rosa Memorial C.O.O. Frank Burn agreed to the new studies.
"If the belief is that a noise study is valuable, so be it," he told the board.
The new contract starts on May first.